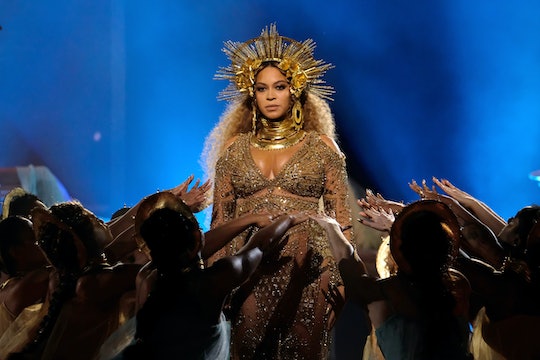 In news that will surprise absolutely no one, Beyoncé absolutely slayed her performance at this year's Grammys, showing off her perfect baby bump and singing “Love Drought” and “Sandcastles” in a gorgeous gold outfit. And, of course, renowned critic and Trump supporter, Piers Morgan just had to say something about it. The journalist and television personality took to Twitter Sunday night to share his own two cents on Queen Bey's performance, and his reviews were a little negative to say the least. Truly, Piers Morgan's tweets about Beyoncé's Grammys performance were just plain rude — even for someone who doesn't appear to be a fan in the first place.

Although, as most people know, Morgan is an outspoken supporter of Trump, it seems that now he is riding on a wave full of hate and discrimination to try and stay relevant today. Recently, fans took a lot of pleasure out of an incident Friday night when Morgan was cursed at by Australian comedian Jim Jefferies, when Morgan tried to defend Trump's travel ban. However, it seems that Morgan didn't think that was enough, and just had to go on a Twitter rant against Beyoncé.

(As an aside: Not only was Morgan happy to rain on Beyoncé's parade, he seemed perfectly fine going after her heartfelt acceptance speech for Best Urban Contemporary Album as well.)

Morgan's tweets really do seem to mimic his own personal idol, Trump, in voice and temper on the social media network. Morgan even claimed that many people think and feel the same that he does, but are too afraid to admit it. At least he didn't blame the "fake," or "dishonest" media (yet).

Thankfully, neither Twitter nor the BeyHive were about to let Morgan off the hook for his harsh statements, clapping back at him with major shade.

Of course, on social media platforms there will always be a variety of opinions, but Morgan's criticisms of Beyoncé and her performance weren't constructive in any way, they felt more like the mean words of an insecure middle schooler.

At least the world can rest assured that Twitter, and Beyoncé fans worldwide, will always do what they can to call out haters when they see fit, and Morgan's hurtful, unnecessary response to Queen Bey's performance was not taken lightly.

Keep it up, Twitter. Morgan has consistently managed to be equal parts insulting, narcissistic, and racist, and if he's going to fling out so much hate and criticism, then he surely deserves a taste of his own medicine.