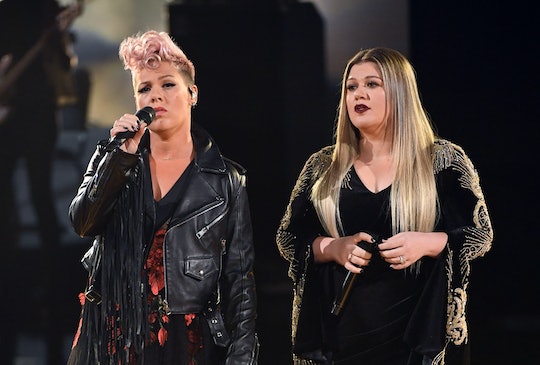 While seeing two queens of music take the stage together might seem like a dream come true, Pink and Kelly Clarkson's opening number at the 2017 American Music Awards is actually more than that. The two superstars' performance has fans feeling every emotion possible and the moment will likely have everyone talking for days and weeks to come.

What makes the soulful performance even more powerful? The two singers had barely met before Sunday night. Speaking to Entertainment Tonight, Clarkson revealed that even though she was a huge fan of Pink's, the two hadn't exactly spent a lot of time together. "I've never met her before," she revealed, before explaining that they had crossed paths years ago. "I think we met in passing, like, quickly on the TODAY show right after I won American Idol, like, 15 years ago. But we didn't really talk," she said.

Well, clearly, the two have both come a long way since then, and their performance together Sunday night has fans of each powerhouse absolutely shooketh with emotions. The two opened the show with their own rendition of R.E.M.'s "Everybody Hurts," paying a touching tribute to all the first responders that have been there during a historically trying year.

But, even though the performance was dedicated to those on the frontline across the nation who have been there to help when a disaster struck, just about anyone watching felt the power and emotion within the song.

Taking the stage Sunday night was an important moment for Clarkson, she told Entertainment Tonight. "I think, honestly, at the end of the day, even though we're different artists, at the core, we both love great singers, we both love soulful music," she said. "She's branched out just like me, in like the singer-songwriter kinda country stuff or rock 'n' roll. We both love a lot of the same things."

And the two clearly have individual sounds that work magically together, if fan reactions are any indication.

Honestly, how great is it that these two talented ladies are working together? As Clarkson told Entertainment Tonight, the world often pits powerful women against each other, something that they don't really do to men, in her opinion. So performing with Pink is a feminist statement as well:

So, it's really cool that Pink and I get this opportunity to show people like, "Hey! Everybody can be successful, there's plenty of talent to go around, plenty of love to go around." We're all different, but at the same time, we all love music and that's why we're here.

Taking the stage to perform a special rendition of R.E.M.'s "Everybody Hurts," Pink and Clarkson hit just about everyone in the feels. After Jamie Foxx introduced the pair, recalling all of the tragedies of the past year, the performance was a powerful reminder that, no matter what, you are not alone.

And when mental health is still not talked about nearly enough, Clarkson and Pink's song choice was especially poignant. 2017 may be a year for progress in many ways, but it's also the year when an email went viral for letting an employee take a day off work for their own mental health. So the lyrics of that particular song were seriously important:

Clarkson and Pink might not have performed together before, but it's clear that the two crushed it on Sunday night. And here's to hoping that this wasn't the last performance from the superstars, because seriously, it was amazing.