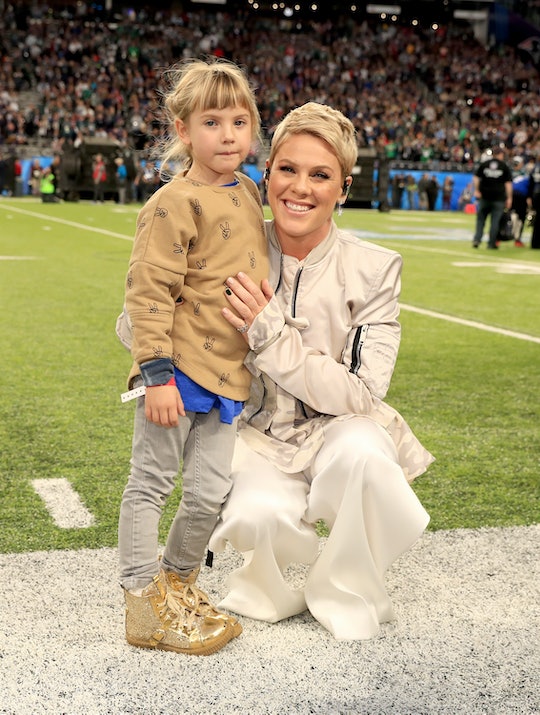 Pink might have the coolest family ever, especially where it concerns her kids. Case in point: Pink's daughter, Willow, got a fierce haircut that's not only trés hip, but it makes her look even more like her mom. Watch out, world.

Dad Carey Hart took to Instagram Sunday with a candid photo of 8-year-old Willow Sage Hart in the salon chair halfway through what appears to be a side shaved, long-on-top, punk rock hairdo reminiscent of her famous mom's signature style. "Loving my punk rock daughter. Remember everyone, fly your own flag," he captioned the amazing shot. "There is no box to be put in. It's better to be your own self. Own it, and love it."

Hart continued his post with a few words of advice, stating, "And if anyone has a problem with it, tell them (politely) to move on. Cant wait to see the woman you grow up to be. I have a feeling you are gonna be strong, fierce, compassionate, and caring. I’m so proud of you, willow."

Needless to say, fans were totally on board with Willow's new look.

"She is fierce but that’s no surprise having you two as her role models. The world needs more people who know themselves and stand behind it without apology," one person penned. "Keep being you Willz, because anyone with half a brain and a good heart applaud it immensely."

Someone else commented: "There's no one that flies that flag better than your amazing wife so it's not shocking that your daughter does the same! Absolutely love your family and all the barriers you break because they should've been broken a long time ago!"

And this fan shared some praise from her own daughter saying, "My 6.5 year old daughter just said, 'Wow Mommy, she looks so cool.' Tell Willow!"

Others noted how similar Willow now looks to her mom, with one fan writing: "Definitely her mother’s daughter."

"Mini P!nk right there!" someone else said.

"She is just stunning- like her Mumma," one fan penned.

And while Willow might be taking after her mom in the style department, the two share another inherited trait. In 2018, for example, she performed a duet with her mom releasing their take on "A Million Dreams" for The Greatest Showman—Reimagined, according to E! News.

Although it seems that Pink and Hart are getting a lot of praise for their most recent social media post featuring Willow, it hasn't always been like this regarding their children. Hart came under fire during Pink's "Beautiful Trauma" tour when he posted a photo of their 2-year-old son, Jameson, who apparently had a bout of hand, foot, and mouth disease, according to Newsweek. Fans railed on Hart saying that he was exposing others to the virus.

Pink experienced similar backlash when she posted a pic of her children running through a Holocaust Memorial in Berlin, with some fans calling it disrespectful, according to the Inquisitr. Pink responded by noting how her kids are Jewish, while also arguing that the memorial is a "celebration of life after death."

Fans are a fickle bunch, especially over social media. But one thing is clear — Pink and Hart will continue to let their daughter express herself in ways that make her feel confident and complete. Rock on, Willow!