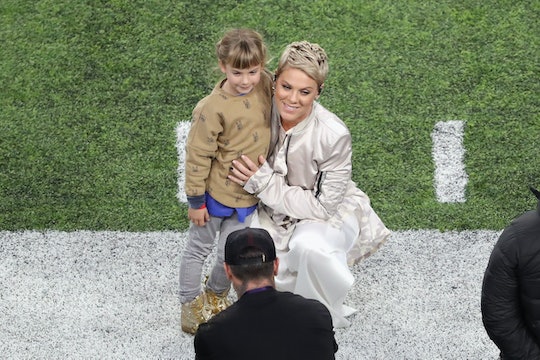 “Pink’s Gum” At The Super Bowl Has Twitter Shook

Pink got the special treat of singing the national anthem during a Super Bowl in which her hometown team was the favorite to win, but she nailed it, as far as Twitter was concerned, before she even sang a note. Pink's gum at the Super Bowl has Twitter shook.

She followed up Leslie Odom Jr., another Philly native, who performed a moving rendition of "America, the Beautiful" with ComMUSICation and the Angelica Cantanti Youth Choirs, two Twin Cities-based children's choirs. Pink, who has been battling the flu and bailed out of singing her hit "Beautiful Trauma" in the middle of the song during her pre-Super Bowl concert, looked like she was chewing gum or maybe sucking on a lozenge right before she began the National Anthem. (Pink later confirmed on Twitter that it was, in fact, a lozenge.) Unfortunately, she didn't ditch it before getting up on stage and was forced to spit it out onto the field. It was just moments before she was due to start singing, so cameras had already closed in on her and caught the whole thing. She delicately plucks the lozenge out of her mouth and politely drops it onto the field before giving a big smile and starting in on "The Star Spangled Banner." Needless to say, it made a hilarious gif.

A three-time Grammy Award winner and consummate professional, Pink powered through her illness to give fans at her pre-Super Bowl concert the full experience, dancing on stage, doing her regular high-flying aerial routines, and singing the things she could, according to CBS. She did rely on her backup singers to help her out and give her voice a break when she needed it. (Pink apologized profusely for quitting in the middle of "Beautiful Trauma," saying, "I hate this. I can't do that song. I'm sorry.") But fans appeared to be sympathetic and sent her supportive tweets after the performance.

She told the crowd that she came down with the flu because her kids "cough into my mouth and I can't stop them 'cause they're so cute," which might be the most relatable thing I've ever heard. (Plus, have you seen 6-year-old Willow and 1-year-old Jameson? They really are so cute.)

Initial reaction to Pink's gum drop (see what I did there) was awe.

But it soon switched to conspiracy theorizing over how the gum would make a comeback later in the game to screw everything up.

And, because this is the year of our lord 2018, a Pink's Gum Twitter handle promptly dropped (after several folks on Twitter wondered when somebody would create one), assuring us that any rumors of a cough drop were false.

Of course, there were some pearl-clutchers who just couldn't pass up the opportunity to criticize a woman for not being a perfect automaton who exists solely for their pleasure, and were bold enough to actually accuse a sick mom who just killed the National Anthem of "disrespecting America."

Like, let's take it all the way down, my friend.

In the end, Pink handled what was probably a super stressful performance with grace — and the lozenge thing was actually pretty funny and charming. When the Eagles first made it to the Super Bowl she tweeted, "Ummm. I’m singing the national anthem and the EAGLES ARE PLAYING?!?!?! IS THIS FOR REAL?!?!?!THATS WHASSUP!!!!!!!!" and then some more exclamation points followed by a general smashing of keys. So she was obviously thrilled to get the job and clearly disappointed that the show had to go on while she was sick. But Pink did the Eagles proud and Twitter (mostly) loved her for it.