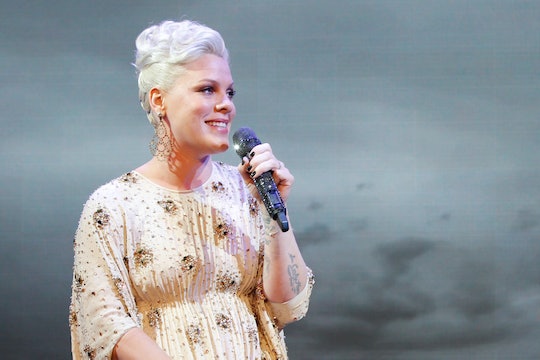 Pink is one of the most adored celebrity moms in Hollywood and it's easy to see why. From Pink's relatability as a mom to her funny and honest quips about parenting, Pink's quotes about her kids throughout the years have been consistently perfect. So perfect, in fact, that Pink might want to consider releasing an album of just mom quotes.

If you know anything about Pink, then you know she doesn't hold anything back, even when it comes to the topic of her two kids, Willow and Jameson. Whether or not you like Pink's music, you have to admit that Pink has done a great job of sharing her love for her kids with the world. Fans have been lucky to hear about Willow's milestones for the past six years of her life, and it's likely Pink will also divulge more details about Jameson as he gets older.

The best part? Pink regularly opens about the importance of raising her kids to be loving and caring citizens of the world, which is so important given the current political climate.

That all being said, here are five quotes from Pink about her kids that will make you love her even more... if that's even humanly possible.

She's Encouraging Willow To Be A "Global Citizen"

Pink said, according to People:

I want her to be a global citizen. She’s very aware of the fact that not everybody has a bed to sleep in at night and food on their table and coats on their back. It’s hard for her to understand. I want her to be 4, you know? I don’t want to give her anxiety issues.

Pink explained, according to HuffPost:

I think its important to help them find their identity and find what they believe in, and to know they can make a difference.

She Has Found A Best Friend In Willow

Pink revealed, according to the New York Daily News:

She's the coolest thing that has ever happened to me. Now I have someone to sing goofy-a*s songs to all day and she likes it. She's not judging me. She's probably the only person who doesn't judge me.

Pink said about Jameson, according to Us Weekly:

She Misses Willow While She's Working

Pink said, according to Essential Baby:

Even being away from her for a few hours is tough for me. I'm glad that when I go back out on tour, she'll be with me all day, and when I go on stage, she'll be in bed. It's perfect.

These quotes are too adorable and special. Thanks for sharing your parenting gems with the world, Pink — your fans appreciate it.