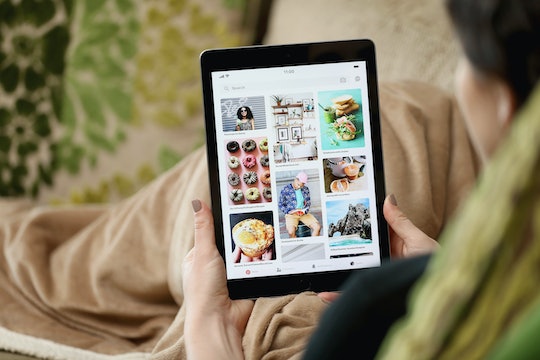 Here's How Pinterest Is Cracking Down On Dangerous Anti-Vaxx Propaganda

Being a parent in the age of Google definitely has its advantages. Not only are answers to pretty much any parenting concern only a click away, but social media has also made it possible to crowdsource opinions and information almost instantly. But both good and bad parenting advice abounds online, especially when it comes to vaccines. Despite doctors' persistent warnings about the dangers of skipping vaccinations, contrary messages are rampant, and it's why, as The Washington Post reported, Pinterest is fighting anti-vaxx propaganda by blocking vaccine-related pins entirely from its search results.

In a recent interview with The Wall Street Journal, Pinterest's public policy and social impact manager, Ifeoma Ozoma, explained that the company had begun blocking search results related to vaccines in December, in an effort to address the fact that the majority of the pins appearing during vaccine-related searches were those promoting anti-vaxx positions.

Though that's far from being a comprehensive, long-term solution (it means even factual, science-based information about vaccines is also being blocked), Ozoma told the news outlet that, ultimately, "It’s better not to serve those results than to lead people down what is like a recommendation rabbit hole." And given that outbreaks of vaccine-preventable diseases like the measles are currently occurring throughout the country? It seems like a step in the right direction.

Though The Washington Post noted that the site is still mostly allowing its 250 million monthly active users to pin anti-vaxx content to their own boards, a general search will turn up nothing. What's more, according to The Guardian, is that Pinterest has also intervened by blocking users from being able to pin content from certain websites it has identified as "dedicated in whole to spreading health misinformation."

The move to block vaccine-related content isn't the first time that Pinterest has attempted to address the spread of inaccurate health information online though. In 2017, the site updated its policies to ban both "anti-vaccination advice," according to Forbes, along with the "promotion of false cures for terminal or chronic illnesses."

Although the notion of blocking certain searches outright is a controversial one, it comes at a time when other social media platforms are being heavily criticized for not doing enough to fight the spread of misleading or inaccurate health information.

In a tweet Wednesday, California Rep. Adam Schiff called out both Facebook and Google for "steering users to bad information that discourages vaccinations, undermining public health," and claimed that searches for "vaccines" on the sites largely led to anti-vaxx results. While Google did not immediately respond to Romper's request for comment, a Facebook spokesperson said that the social media giant has "taken steps to reduce the distribution of health-related misinformation," and added, "We're currently working on additional changes that we'll be announcing soon."

Schiff is far from being the only one raising alarm bells about the real-life impact of the online anti-vaxx movement though. Earlier this year, the World Health Organization named "vaccine hesitancy" as one of its "ten threats to global health in 2019," alongside other concerns including climate change, antimicrobial resistance, and Ebola. And though the WHO didn't specifically identify the spread of anti-vaxx propaganda online as an issue, it *did* note that vaccine hesitancy is "[threatening] to reverse progress" in the fight against vaccine-preventable diseases, and that "1.5 million [deaths] could be avoided if global coverage of vaccinations improved."

As a parent, it can sometimes be difficult to make informed health decisions when so much scary-sounding rhetoric about vaccines is circulating online. And even if you know it's not actually supported by medical evidence, online strangers' claims about side effects, "vaccine injuries," and Big Pharma conspiracies really may make well-intentioned parents doubt their doctors' advice.

The problem? Those doubts can have a life-threatening impact on children who are then put at risk for entirely preventable diseases. And while Pinterest's decision to block vaccine searches is unlikely to stop that from happening entirely, at least it's an attempt to stop dangerous information from spreading.