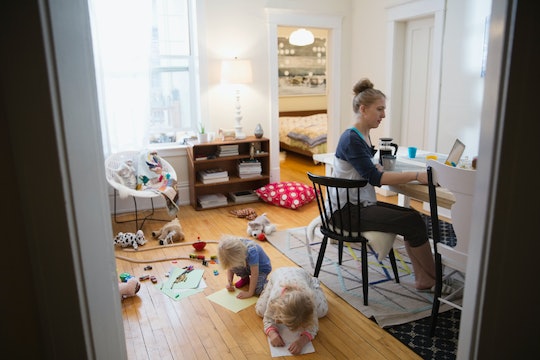 Pinterest Virtual Assistant Jobs Are... Not A Scam, It Would Seem

Currently living out your dream of bringing in money from your couch, Lily Ugbaja is a "Pinterest virtual assistant" living in Nigeria who says she made $250 doing eight hours of work per client in her first month.

She had been writing a blog that wasn’t doing as well as she hoped, so she was looking for side hustles when she discovered Pinterest management.

“Since I was already going great on Pinterest with my blog, I decided to offer Pinterest services on the side, and that was a smart decision,” Ugbaja tells Romper.

She likes that you can do all your client work earlier in the month and then take the rest of the month off — or work around any type of schedule.

It seems like there’s one multi-level marketing (MLM) scheme after the next promising we won’t have to get dressed or leave our cozy homes to make thousands. So are Pinterest virtual assistant jobs merely the latest trick offering?

The proposition is certainly tempting: ads on Facebook sell PVA positions to moms (and let’s be honest here, these are nearly all aimed at SAHMs hoping to score a job they can slot in around care-giving) as the opportunity to help businesses create "pins" (which users then click on, winning those businesses web traffic).

After all, it’s easy! Starting is totally free! You don’t need to be a tech guru to figure this one out! In fact, if you’ve fallen down the rabbit hole that is Pinterest, then you’re basically qualified to start right away.

Sounds too good to be true?

Turns out, it isn’t. We were shocked to hear this, too. In fact, we couldn’t find a single person to interview to tell us that this is just another scheme prying on moms trying to make a buck.

You may not make millions as a Pinterest virtual assistant, but you can make some money and there is a low barrier to entry.

A Pinterest VA is essentially someone who takes their own skills and experience marketing on Pinterest and packages it into a program to teach others how to offer that service (or offer the service themselves), says Daphne Richard, owner and consultant with a primary focus on helping people transition from employment to freelancing.

Companies with a marketing budget tend to pay more, but they’re also looking for Pinterest virtual assistants who have been doing this longer.

Kristin Larsen, of Nashville, started her Pinterest virtual assistant career because she wanted a side hustle.

She offered her Pinterest skills to bloggers, brands and businesses in 2015 — long before most others hopped onto this career path — and she quickly became inundated with work.

“I was able to walk away from my full-time day job in only 10 months,” says Larsen, who created a boutique agency because she had too many clients to handle alone.

Profitability varies, however. Companies with a marketing budget tend to pay more, but they’re also looking for Pinterest virtual assistants who have been doing this longer.

Still, Larsen says, with just one client, a PVA can start out making $500 per month working as few as eight hours per month.

With pin design, she says she’s been paid as much as $3,000 to help update an older website’s graphics over the course of a month.

“The best part is that unlike most social media positions, Pinterest is not time sensitive,” she says. “All work can be completed using a scheduling tool, and planned in advance, allowing people to work at a time that is convenient for them.”

But not everyone is going to make that amount of cash, says Rochelle Burnside, who is skeptical.

Burnside, the manager of the MLM category on Best Company, says that while Pinterest VA jobs aren’t MLM schemes, they do appeal to stay-at-home moms with the promise that these women will receive a big payout for a limited time investment.

“Off the bat, I’m skeptical,” she says, though she added that Pinterest VA positions aren’t scams.

Chane Steiner, CEO of Crediful, a personal finance comparison site based in Scottsdale, is a little skeptical as well.

Steiner says that while a Pinterest VA is not an MLM system, the job entails a wide range of potential duties.

Your background could be in marketing coupled with personal experience with social media and an emphasis in Pinterest. Or, she says, you could have a background in management or as a digital assistant in general.

You could take a Pinterest VA course in order to learn the ropes, but it’s not required.

“These are legitimate people with legitimate job offerings,” Steiner says. “Where the trick comes in is how you get paid.”

“It might be acceptable as a side hustle, but not as a full-time job,” Stiner says.

More Like This
The “Tripledemic” Is Scary, But I Feel Less Helpless When I Wear A Mask
Moms, Just Eat The Fruit Dammit
My Parents Never Taught Me To Cook So I'd Always Need Them
The 4 Main Parenting Styles & Which Is Best For Kids