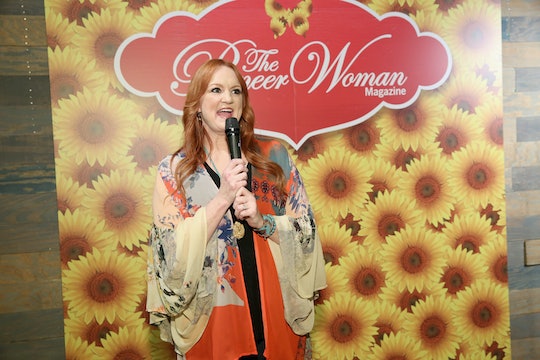 Ree Drummond Of 'Pioneer Woman' Officially Has Her Own Barbie

There's a reason Ree Drummond is one of America's favorite home cooks. Her cooking show, The Pioneer Woman, has been on the Food Network for years and she's built an empire around her down-home, butter and cream-filled, recipes. She has a line of super popular cookware and a slew of cookbooks to her name. Now, you can add this to her list of accomplishments - Mattel has made its newest Barbie in her likeness. So, it's no surprise Pioneer Woman Barbie will be on everyone's holiday wish list.

The Barbie Pioneer Woman Ree Drummond Kitchen Playset with Cooking Chef Doll retails for about $45 at Walmart. There's also a Pasta Cooking Accessory Kit for about $10. Everything you love from Drummond's Saturday morning cooking show has been shrunk down to Barbie-size, right down to her brightly-colored teal fridge which is filled with all of her go-to cooking basics.

The extremely popular set comes with a Ree Drummond Barbie complete with flowing red locks, a sensible floral blouse, skinny jeans, and knee-high brown boots. The kitchen is fully stocked with over 30 mini accessories like mixing bowls, apron, oven mitt, frying pan, food, and more. Plus there's a toaster that actually pops, and a mixer that really spins. What more could a kid ask for? And if that's not enough, you can always opt for the extra pasta or barbecue accessory sets.

But beware, something tells me that stepping on a mini potato masher in the night might rival the pain of an underfoot Lego.

Most recently, Drummond partnered with Instant Pot to debut her own line of the versatile kitchen appliance, so you too can have a Pioneer Woman accessory with which to play.

Barbie's coming a long way since her first iteration in 1959. Since then she's had over 180 careers — everything from a lawyer and a computer engineer to a veterinarian and a babysitter, according to Barbie's Media site. But now, young fans are looking towards a growing line of celebrity Barbies, of which Drummond is the latest. She joins the likes of Beyonce, Cher, J.K. Rowling, Audrey Hepburn and more, according to Marie Claire.

When Drummond was first approached about the idea, she immediately went back to her childhood recalling how she'd play with Barbies for hours with her sister.

“My younger sister, when she got them as gifts, I was too old to play with them, but I did anyway,” Drummond said in an interview with Delish. “I remember spending hours with the Barbie Dream Home and the camping sets when I was younger.”

Drummond had a say in every aspect of the design right down to the tiniest details. In fact, she spent over a year fine-tuning every piece in every set, according to Delish.

The only bad news? The play set and accompanying accessory sets are currently sold out, according to Walmart's website. And, it's only a matter of time before these popular items end up on eBay. So, continue to keep an eye out if you have a Barbie fanatic who can't wait to find one of these in a wrapped gift box. Until then, you and your little sous chef will have to continue to get your Pioneer Woman fix every Saturday morning on Food Network. Good luck, y'all!

More Like This
An Ode To Kirstie Alley & Her Messy Self
Ryan Reynolds Posted A Festive Photo With Blake Lively (& Her Baby Bump) In Holiday PJs
Andy Cohen's 3-Year-Old Son Ben Has Officially Taken Over An Important Hanukkah Tradition
Aww! 2-Year-Old Archie Is "Very Happy" To Be A Big Brother