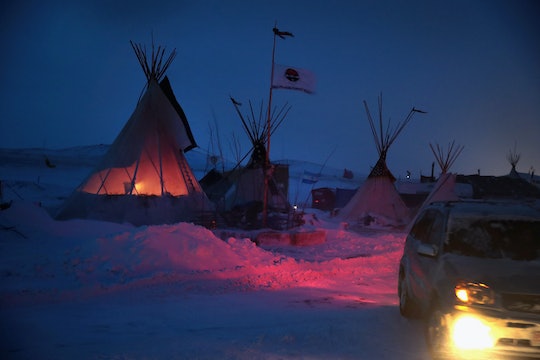 Pipeline Spills 176,000 Gallons Of Oil Into Creek By DAPL, Despite Claims Spills Are Rare

After much protesting, the federal government denied the permit to complete the construction of the much-protested Dakota Access Pipeline earlier this month. Despite claims from Dakota Access Pipeline supporters that oil spills are rare, a pipeline recently leaked 176,000 gallons of oil in North Dakota. Concerns over DAPL's impact on Native Americans' water supply have been seen as unfounded by critics, but a recent oil spill miles from the site of the DAPL protest camp exemplifies how important it is that construction of that project has stopped.

Oil spilled from Belle Fourche Pipeline into the Ash Coulee Creek on Dec. 5, The Associated Press reported. Although electronic monitoring equipment was in place, it didn't detect the leak, which was instead discovered by a landowner, ABC News reported. "A series of booms have been placed across the creek to prevent downstream migration and a siphon dam has been constructed four miles downstream of the release point," Bill Suess, an environmental scientist with the North Dakota Department of Health, said in a statement.

It's unclear what caused the spill, but the Department of Health will investigate, ABC News reported. Oil migrated as far as six miles from the site of the spill, and no drinking water was contaminated. The large spill occurred about 150 miles away from the site of protests against the Dakota Access Pipeline, which runs under the Missouri River. Protestors feared the pipeline could contaminate the only source of drinking water for the Standing Rock Sioux, a Native American tribe that lives in North Dakota, if an oil spill occurred.

Those who were in defense of the pipeline argued that such spills are rare. In an interview with Valley News Live, Energy Transfer Partners CEO Kelcy Warren assured the safety of the Dakota Access pipeline:

The majority of the pipeline through the state of North Dakota is buried. It's thick walled steel pipe, it's buried at four feet underground...[and] most leaks are caused by human error. That's number one. Our pipeline is very, very safe.

He added that control rooms that monitor the pipeline would limit how much oil is spilled should a leak ever occur. But Warren emphasized that he doesn't "think [a leak is] going to happen."

The recent oil spill goes completely against that belief. And so do the stats: the Pipeline and Hazardous Materials Safety Administration has reported that, since 2010, more than 3,300 leaks and ruptures of oil and gas pipelines have occurred across the nation.

More than 320,000 gallons of oil has been spilled from 36 leaks in Montana, North Dakota, and Wyoming, CNBC reported — and that's just from one company.

And Sunoco Logistics, the Dakota Access Pipeline's operator, has spilled oil more often than any other pipeline operators, Reuters reported. A spokesperson for Energy Transfer Partners reiterated the safety of the Dakota Access project to Romper, but declined to comment on the Belle Fourche spill.

But just because construction has stopped doesn't mean the drinking supply of the Standing Rock Sioux will remain clean, because president-elect Donald Trump supports the Dakota Access Pipeline and will have the power to reverse the decision once he becomes president in January.

So spreading information of what happened with the Belle Fourche Pipeline is key in keeping people informed so they can decide to help prevent something similar from happening to the Standing Rock Sioux.