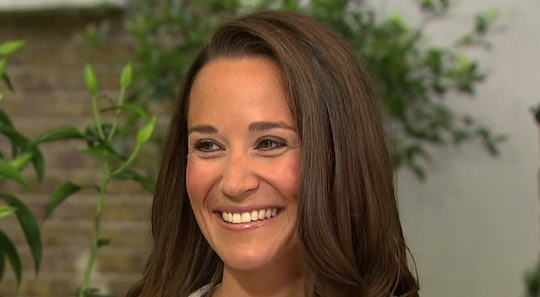 Pippa Middleton Says Her Son Is Benefiting From This "Alternative Therapy"

The Duchess of Cambridge's younger and only sister recently celebrated her son's first birthday. And a few weeks after the milestone, Pippa Middleton revealed her son is trying an "alternative therapy for newborns" called cranial osteopathy. Middleton says the therapy is benefiting her little guy, but some experts warn there isn't any scientific evidence to support the practice.

Writing in Waitrose Weekend magazine, Middleton, who is mother to 1-year-old Arthur Matthews, reportedly wrote, according to The Mirror: "Soon after Arthur was born last year, I heard a few mums talking about seeing a cranial osteopath. It’s a popular alternative therapy for newborns, particularly those who have had a traumatic birth, are unsettled, or have trouble sleeping."

The therapy, she says, "claims to heal, relax and promote sleep, digestion and body alignment through gentle head and body manipulation." She also noted "there is a lack of scientific evidence" to prove the practice is beneficial, which is true. Many experts claim there's no proof that the therapy (gently moving a baby's head and spine) can reap positive results.

After "hearing positive things about it," however, Middleton decided to take Arthur to a cranial osteopath when he was 7 months old.

"I was fascinated to see how calming it was for him, but also how valuable the feedback was," she shared about the experience, according to Yahoo News. "The osteopath noticed one side of his neck was tighter than the other, which explained why he favored one side sleeping. She also saw that his arms were stronger than his legs, so she gave me an exercise to help him."

According to the expert Middleton cited, the technique "uses gentle, non-invasive techniques to gently manipulate the head and spine, which affects the whole body." Furthermore, it's supposedly "gentle, soothing and great for helping babies relax."

It's important to note here once again that experts have found no scientific explanation to support the practice. "This treatment regime lacks a biologically plausible mechanism, shows no diagnostic reliability, and offers little hope that any direct clinical effect will ever be shown," says Dr. Steve E Hartman, writing on behalf of the Department of Anatomy, College of Osteopathic Medicine at the University of New England. "In spite of almost uniformly negative research findings, 'cranial' methods remain popular with many practitioners and patients."

Other researchers, however, say there isn't enough evidence to draw conclusions on the practice's effectiveness.

This isn't the first time Pippa Middleton has spoken out about the various health and lifestyle aspects of raising her son, who was born last October. She recently commented on, for instance, the benefit swimming has had on his physical health. "Starting my son Arthur swimming at four months old has given him confidence and enjoyment in water," she reportedly wrote. "He's now six months old, and swimming is one of our favorite activities. The exercise helps guarantee sound daytime sleeps, and the movement has improved his digestion."

Most recently, the mother has been trying to "come up with different activities" to do with her son, and writing that her "saving grace" was the local baby gym. "It’s a big space full of fun, soft objects, play mats, stairs, balls, swings, mini trampolines, and more to stimulate and physically engage babies and toddlers," she wrote, according to Us Weekly.

Of course, it's nobody's place to judge how Middleton chooses to raise her son. But with any alternative form of therapy or medicine, it's best to consult with a trusted physician before making any decisions.