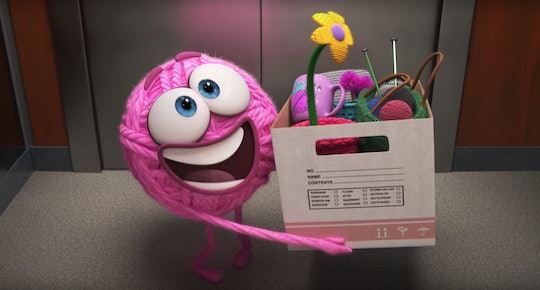 You may love Pixar for its quippy shorts, classic movies, and beloved characters, but its latest project is actually a cultural commentary laced with tons of metaphor and poignancy. In fact, Pixar's new short, Purl, contains an important message about women at work, and it's one to pay attention to.

The new short, which was released on Monday, is just the first from the Pixar's SparkShorts Program, which the company's website explains is a new program designed to feature "new storytellers, explore new storytelling techniques, and experiment with new production workflows," adding that the shorts will be "unlike anything ever done" at Pixar, offering new artists a chance to create freely without the pressure of doing it on such a huge scale.

It's clear that even just the first short of the series definitely hits the nail on the head, providing a more serious subject matter than usual, but animated with the same quality and characterization that makes Pixar so beloved.

In the short, a ball of yarn named Purl tries to get — and keep — a job at a new workplace, but has trouble fitting in because she is literally and metaphorically "soft," represented by a ball of knitting yarn placed next to human men working at the company.

The short opens with Purl landing the job and being told she had the "most qualified résumé," but soon afterwards having trouble fitting in with the office culture.

Purl is seen decorating her desk in "soft" things, like knitted patterns, and trying to join the conversation at the water cooler but quickly being shut down. At that point, Purl is seen trying to navigate a meeting while using language that's funny and light, though her colleagues agree that the approach must be "aggressive" if they want to "win."

Of course, Purl, despite being as smart and capable as her peers, feels out of place, if not ostracized, because she's different. It's at that point that she begins to conform to the masculine expectation of the workplace, literally re-sewing her "clothes" into a straight suit, remodeling her formerly round body into a straight one. There are a lot of potential metaphors in this, but let's stick with the most obvious one: to thrive at a company, Purl had to lose any semblance of her femininity.

It all comes crashing down, of course, when Purl is greeted by Lacey, another female who joins the company, and is made of yarn like her.

At this point, the pair seem to recognize that their femininity and own unique qualities are actually an asset to the workplace, and they shouldn't have to give it up in order to fit in.

The short's director, Kristen Lester, and producer Gillian Libbert-Duncan, told Polygon that the inspiration for the short was Lester's experience being in the field of animation. “My first job, I was like the only woman in the room, and so in order to do the thing that I loved, I sort of became one of the guys," she told the site. "And then I came to Pixar, and I started to work on teams with women for the first time, and that actually made me realize how much of the female aspect of myself I had sort of buried and left behind."

Pixar is set to release two more SparkShorts this month, first Smash & Grab, a love story about robots, and then Kitbull, a story about a pitbull and a kitten. Whether or not these will contain such a profound undertone isn't yet clear, but what is evident is that Pixar is willing to experiment, and it seems that it's working for the better.