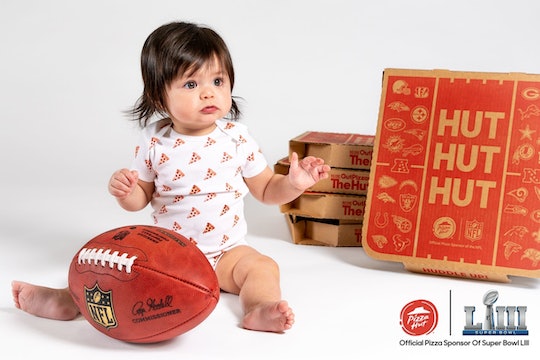 Although there will be a lot of celebrating going on during the 2019 Super Bowl, Pizza Hut also wants to celebrate new parents during the big game. And if your due date is days away, take note! That's because Pizza Hut will give free 2020 Super Bowl tickets (and pizza!) to the first baby born during this year's game.

Sure, some expectant moms might just be so ready to give birth ASAP as is, but if you so happen to welcome your bundle of joy this Sunday, Feb. 3, during the big game, there's even more to look forward to. According to People, Pizza Hut is awarding one special family who welcomes their child into the world on Sunday, right after kickoff during the Super Bowl, with a pretty sweet gift.

The lucky family will win pizza for an entire year, which will be awarded in the form of a $520 Pizza Hut gift card, and tickets to Super Bowl LIV, which will be held in Miami, Florida next year.

Here's how to enter: Moms who give birth this Sunday, Feb. 3, during the Super Bowl need to tweet a photo of their new baby to @PizzaHut on Twitter, along with the exact time they gave birth, along with the hashtags "#PizzaHutSpecialDelivery" and "#promotion" to be considered to win the grand prize.

Needless to say, expectant moms on Twitter are loving this giveaway, although some people are kind of wishing they knew about this contest sooner (as in, like, nine months ago).

"A year too late! My son was born at halftime last year!" another shared on Twitter.

Another fan of giveaway asked the question we all want the answer to: "I've got a food baby to deliver, does that count?"

Really, people really wanted to know about this giveaway a long time ago...

Even if you give birth just a bit earlier or later than kick off, Pizza Hut will make free deliveries to hospitals in the Boston, Massachusetts and Los Angeles, California areas, according to Yahoo! — which is where both teams playing in the Super Bowl hail from. So, if Rams and Patriots fans can't be at home rooting on their favorite team, then eating pizza from the hospital with a new baby in their arms can certainly help ease this disappointment, right?

Timing will be everything on Sunday night. Considering that kickoff is slated to start at 6:30 p.m., according to CBS Sports, moms who give birth earlier in the day unfortunately won't be eligible to win the contest. This goes without saying, but it's almost impossible to control the exact time a baby is born, so no one should be putting their life (and their child's life) in danger just for the potential of winning free pizza and Super Bowl tickets.

However, those who are lucky enough to give birth at the right time on Sunday, Feb. 3, will definitely want to consider putting themselves in the running.