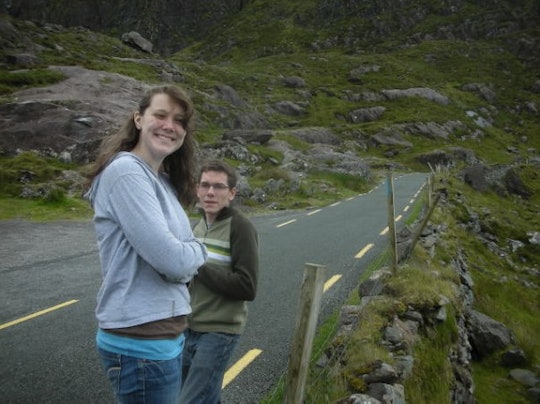 I developed panic disorder seemingly out of nowhere. I had no idea what was wrong with me. I went from being someone who could travel overseas with no problem to someone who was afraid to leave the house in less than a month. It’s pretty difficult to know how to get help when you don’t have a name for the tsunami of physical symptoms, fears, behavioral changes, and sadness, but help came to me at Planned Parenthood. If the nurse practitioner I saw there hadn’t been able to decode my symptoms and really sit and talk to me, I’m not sure where I’d be today or how I would have gotten treatment.

There are people in this world who hate Planned Parenthood. But I owe them my life.

Panic attacks are tricky. They aren’t at all like how they’re portrayed in movies — at least, not for me. There was no flailing or yelling or a certainty that I was having a heart attack. Mine were much more inward: a prickle of adrenaline at the base of my spine, a clenching spasming digestive tract, muffled sounds, a feeling of vertigo, lightheadedness, terror, and an overwhelming urge to escape the situation I was in. And they struck out of nowhere. In an attempt to control these awful attacks, I simply started avoiding places where it would be inconvenient, embarrassing, or dangerous to be completely incapacitated.

I didn’t link these problems to anxiety. Although, looking back, it makes sense that I was stressed. I was 23. I had my first real job teaching preschool. I was planning a wedding. I had student loans. I was adulting for the first time. I come from a long line of people with serotonin deficits, and anxiety and depression are definite manifestations. Lucky for young adults everywhere, those years of change and big-life decisions are often the years when mental illness likes to suddenly show up.

I was pretty educated about mental health. I’d taken psychology courses; I was diagnosed with depression and Inattentive Type ADHD in high school. But I had never had a problem with anxiety. Or so I thought.

The first time it occurred to me that it might be anxiety, I was sitting in a crowded, dimly lit waiting room at my local Planned Parenthood. Like many recent college graduates with underpaying jobs, I had the bare minimum for health insurance. I had ridiculous deductibles and no coverage for preventive care. Basically, if I got hit by a bus, I wasn’t totally fucked, but that was about it. My yearly trek to Planned Parenthood was the only medical care I was receiving.

I sat in the waiting room, waiting for a refill on my birth control, listing my last menstrual period and describing my family’s history of breast cancer when I saw those little check-if-you-need-them boxes. Staring at them, I had a lightbulb moment: I was depressed. I felt like a worthless individual, afraid to go out to eat, afraid to go on public transportation ever since my first full-blown attack on the trolley, constantly waking up feeling so sick to my stomach, convinced I was coming down with the stomach flu. I was constantly late to a job I really loved and feeling really low about what a bad employee I suddenly was. I had no idea why my then-fiancé wanted to marry me. I didn’t even want to leave the house. I had started having annoying habits, like going to the bathroom every 20 minutes, more if we were planning on going anywhere. I had to fall asleep with TV shows on, because they were the only thing that could distract me from my misery enough to let me relax. I started having increasingly compulsive habits. I had to be the closest person to the bathroom. I couldn’t sleep under covers because they might impede me from getting to the bathroom. I would only eat bland food and restricted my food and liquid intake well in advance of having to go anywhere. I was miserable, and miserable to be around. So I checked that box. Then I looked at the box next to anxiety.

All of my weird behaviors were based on fear. It was the first time I really put that together. I was terrified — terrified of being stuck somewhere, of soiling myself, of fainting, of being embarrassed — even though, as my fiancé had pointed out, nothing traumatic had actually happened to me. So I checked the box next to anxiety.

I got called back and we went through the basics — a breast exam, discussion about menstruation, condoms, and birth control. I’d been on the pill for about four years; I was used to this script. But this nurse practitioner was thorough. She asked me to tell her about my anxiety and depression.

Without any prodding, I listed off my strange, seemingly unrelated symptoms. I started telling her about how unmanageable my life was, how obsessive I’d gotten about the bathroom and about not getting trapped places, how I was afraid to wait in the checkout line of the grocery store, how I felt sick all the time. She didn’t diagnose me, but she listened. She agreed it sounded like I would benefit from talking to someone. She asked about my insurance and if I knew where to start to look for help. I knew it wouldn’t be covered.

“I heard about a program,” she said as she pulled out her little notepad, “students at this college of medicine see patients for a flat fee. They’re supervised by their teachers and it gives them clinical experience.” She wrote the name of the college. She didn’t have any other information. It wasn’t a widely advertised program. I suspect that’s because they had limited slots. But I tracked down the number. I called. I talked to an actual trained person.

I sobbed on the phone. Somehow, in Planned Parenthood, I had kept it together, but this woman, who seemed to truly understand my strange phobias and odd behaviors, was so kind. She got me in to see someone that week. She scheduled it for a time when my fiancé could come with me. She didn’t give me crap about not being able to drive myself the 10 minutes it would take to get there.

The student psychologist I met undoubtedly saved my life. She gave me names for what I was experiencing: panic disorder, agoraphobia, OCD. We made a plan to learn to cope with the physical sensations. We worked on exposure therapy, exposing me to my triggers and learning to ride out the uncomfortable sensations. I started noticing that my day-to-day anxiety was slowly lessening. It took a while (and it eventually took medication), but my life started to balance out.

Really though, I think what I just found was someone who cared. The people at Planned Parenthood really cared about getting healthcare to underserved people. They really cared about me. Congress tried to defund them, I just kept thinking that there was no way anyone could want to put an end to something that’d been so life-saving for me. I owe everything to that woman. I might have pieced things together on my own. But I might not have been able to enjoy my wedding day. I might have lost more precious hours and days and years hiding in my room, hating myself. But I got help. That woman at Planned Parenthood made me realize that help was out there, that there were people on my side.

For that, I will forever be grateful.

More Like This
Dr. Jill Biden Just Delivered Some Frank, But Powerful, Advice On Motherhood
Reddit Applauds Mom Of Five Who Stood Her Ground & Left Sleeping Dad Behind
Sex And Mom Guilt: When I Date Someone New, Am I Cheating On My Kids?
I’m A Newly Single Mom. How Do I Get Over My Body Insecurity?