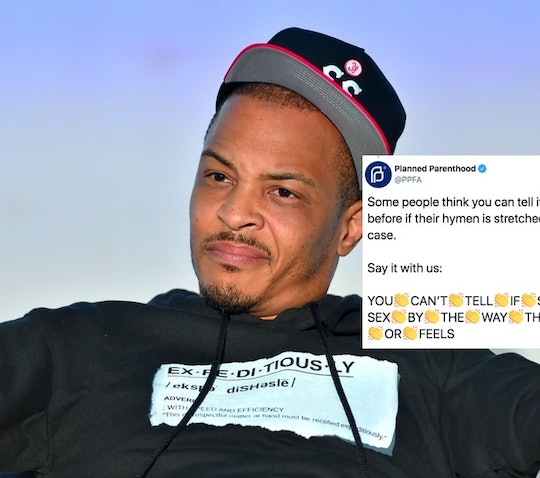 Planned Parenthood Expertly Chimes In On T.I.'s Comments About His Daughter's Hymen

The internet was abuzz with outrage Wednesday after rapper T.I. revealed he regularly accompanies his 18-year-old daughter to the gynecologist to have her hymen checked. While many were quick to criticize and condemn the 39-year old rapper, one well-known sexual health care provider sought to educate. In fact, Planned Parenthood's Twitter thread on virginity and hymens seems like exactly what T.I. needs to read.

In an episode of the "Ladies Like Us" podcast that has since been deleted, T.I. opened up about his controversial parenting style, including how he checks to see that his daughter is still a virgin. "We have yearly trips to the gynecologist to check her hymen," BuzzFeed News reported T.I. said of his 18-year-old daughter Deyjah Harris. The rapper then went on to briefly describe those appointments, revealing that he apparently has his daughter sign a form consenting to his presence and is dismissive of the doctor's knowledge about the hymen.

"Then [the doctor] come and say, 'Well I just want you to know that there are other ways besides sex that the hymen can be broken, like bike-riding, athletics, horseback riding and just other forms of athletic physical activity,'" T.I. said, according to Vice. "So I say, 'Look, doc, she don’t ride no horses, she don’t ride no bike, she don’t play no sports. Man, just check the hymen please and give me back my results expeditiously.'"

As talk of T.I.'s controversial comments grew, Planned Parenthood opted to turn the trending topic of conversation into a teachable moment. "Idk who needs to hear this but virginity is a made-up social construct, and it has absolutely nothing to do with your hymen," Planned Parenthood wrote in a tweet that kicked off a thread likely meant for T.I., although it didn't name him directly. "A virgin is someone who's never had sex. But 'sex' means different things to different people, so 'virginity' does too."

While Planned Parenthood acknowledged that some people didn't care about the complex meaning of "virginity," some facts couldn't be disputed. "Whatever you believe, the fact is you can’t tell if someone’s had sex by checking their hymen," the health care provider tweeted.

Planned Parenthood went on to describe the hymen as "a thin, fleshy tissue" located at the opening of the vagina, noting that "like other parts of our bodies, hymens are a little different for everyone." What's more, Planned Parenthood noted that although "many people think the hymen totally covers the opening of your vagina until it's stretched open," that's not usually the the case at all.

"Most hymens naturally have a hole big enough for period blood to come out and for you to use tampons comfortably," they tweeted. "Some people just naturally have hymens that are more open. And many other activities besides sex can stretch your hymen — like riding a bike, doing sports, or putting something in your vagina (like a tampon or finger). Once your hymen is stretched open, it can’t grow back."

Of course, Planned Parenthood isn't the only health center to bust the myth of the hymen. Columbia University has also declared that "the concept of an 'intact' hymen is a myth" and that "the hymen is not a reliable indicator of whether a person has been sexually active or not." The university's Health Q&A instead notes that "hymens vary in shape, size, and thickness" and can be easily stretched or torn as a result of normal activities.

For these reasons, among others, the United Nations World Health Organization has long condemned "virginity tests" such as the one T.I. reportedly has doctors perform on his daughter as "degrading, discriminatory, and unscientific."

Or as Planned Parenthood put it in their Twitter thread on hymens, "YOU. CAN’T. TELL. IF. SOMEONE’S. HAD. SEX. BY. THE. WAY. THEIR. HYMEN. LOOKS. OR. FEELS."