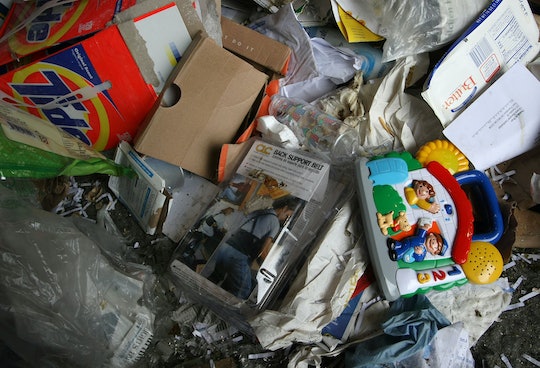 There's nothing quite like a toy store to elicit a sense of wonder in a kid, and seeing delighted children unwrap a shiny new present can bring anyone a dose of unadulterated joy. But once you start delving into the enduring problems that come with plastics, you might start to notice just how much plastic is involved in creating kids' toys — and that might start to ruin the magic for you. Plastic toys are actually a huge environmental problem, and if we want to raise sustainability-conscious kids, it's important to raise them with awareness of those issues.

Many parents have already questioned the chemicals used to create certain toys, and many of them try to skip certain pollutants when picking out toys for their children. But as it turns out, parents need to start being more mindful of the impact kids' toys are making on the environment, as well. According to Plastics, 90 percent of all toys on the market are made of plastic, and the toy industry in the United States only seems to be growing — according to the NPD Group, it's been growing by 5 percent a year, and reached a staggering $20.4 billion in sales last year.

The problem is, plastic essentially never decomposes. That means every single cheap kids' meal toy your child has brought home, every Barbie you've thrown out or given away, every LEGO piece you step on — it's still going to be on this planet long after you or your child (or their child) is gone. Even if you use your recycling bin dutifully, recycling toys is usually difficult, since most are made from several different materials — according to the David Suzuki Foundation, seeing toys made of "a combination of every type of plastic (numbers one through seven)" isn't uncommon.

Giving away used plastic toys to others is a good idea, but it doesn't solve the problem, because you're still buying into that wasteful cycle in the first place. So what can you do if you want to teach your child, early on, to respect the environment they're growing up in?

First of all, help them consider less. Kids are incredibly empathetic, and if you teach them about the dangers of pollution, they might even want to turn down cheap, short-lived toys of their own volition. Instead of relying on plastic toys for older kids, teach them to find joy in other activities: making art, writing stories, reading, and adventuring outdoors (the last of which should help them develop an even deeper appreciation for the environment).

But hey, they're also kids. Toys are fun, and they can be very educational. Luckily, people are becoming much more aware of the havoc plastic can wreak on our planet, and there are many plastic-free toys for kids out there. There are also plenty of sustainable toy companies cropping up that either use closed-loop systems or no plastic. (Many of them are also way cooler and more durable than plastic toys.)

"You have all these toys ― they’re cheap, they’re made out of plastic, they break easily. Most of the time they end up in the trash," Steve Rho, CEO of the sustainable Big Future Toys, told the Huffington Post in May. "It was totally incongruent for us to buy these toys for our kids for their edification and enjoyment. We’re actually harming their environment that they’re going to live in for the rest of their lives."

Once you start learning about the problems associated with plastic and other environmental issues, get your kids involved in making a difference. It's their world we're living in, and raising kids to have respect for the environment is critical to ensuring a safe future for them. And once you look at it that way, it'll seem hard to look at their usual toys in the same way you used to.

More Like This
13 Is "Too Early" For Kids To Be On Social Media, Surgeon General Cautions
Barbie Honors Aviator “Queen” Bessie Coleman In Their Inspiring Women Line
30 Messages To Write In A Valentine's Day Card For Your Child
The Best Travel Tips For Solo Parenting
What Parents Are Talking About — Delivered Straight To Your Inbox