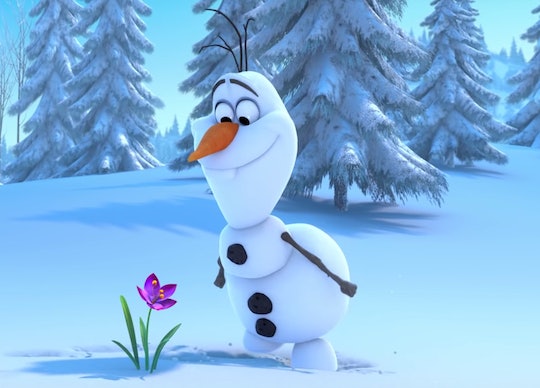 Toys that combine two independently good things — i.e. Harry Potter LEGOs and How To Train Your Dragon Hatchimals — are always a hit. The next crossover toy hitting the market is Play-Doh's Olaf Sleigh Ride, dropping fall 2019 just in time for the release of Frozen 2, and I'm pretty confident kids are going to be ecstatic for this winter-themed fun. Get excited to build a snowman — well, sort of.

Let's back up for a sec. The massively popular Frozen which hit theaters in 2013 is finally getting its sequel six years after its release, and the world is hype to say the least. The Frozen 2 teaser trailer dropped on February 13, 2019, and it literally set records, becoming the most viewed animation trailer ever in just 24 hours according to Cinema Blend. But that's actually kind of an unsurprising feat considering the first movie about Anna and Elsa is the highest grossing animated film of all time, per The Wrap. So of course the Frozen-fandom met the trailer with major excitement.

Now that the sequel is officially on the public's radar, the toy world is getting the ball running on the oodles of products that will accompany the movie's release. Sure there's been a steady stream of Frozen toys since the first film came out, but things are sure to ramp up, and Play-Doh's newest project is just one of the early products being announced.

The latest Arondale-themed product from Play-Doh is Olaf's Sleigh Ride, featuring Olaf, the hilarious summer-obsessed sidekick of the Frozen universe. The Hasbro creation uses the snowman himself to make creating shapes fun: when you press down on his hair, Olaf claps his hands together over interchangeable molds on his palms to create shapes that are relevant to the movie; snowflakes or a dainty Sven, his trusty reindeer buddy.

He looks just like the Olaf you see in the movie, right? (Though I find the shocked expression on Play-Doh Olaf's face a little creepy if I look at it for too long, but I digress.) The nice thing about this set is that it won't take up too much room, but it comes with a lot of stuff. You'll get Olaf (of course), the sleigh which also has half molds around its frame for more winter-themed shapes, the interchangeable Sven and snowflake molds mentioned above, a snowflake roller that attaches to the sleigh, and six cans of Play-Doh compound all in one neat pack. Quick note: The set is designed for kids 3 and up, so the smallest little ones actually will have to let it go, unfortunately.

Olaf's Sleigh Ride is going to retail for $15, and it will be available starting August 1, according to a Hasbro rep — sorry you've gotta wait six more months before the fun can start. Frozen 2 won't be in theaters until November 22, so hopefully this Olaf-themed Play-Doh set will tide your kids over until they can finally find out what Anna and Elsa are up to.