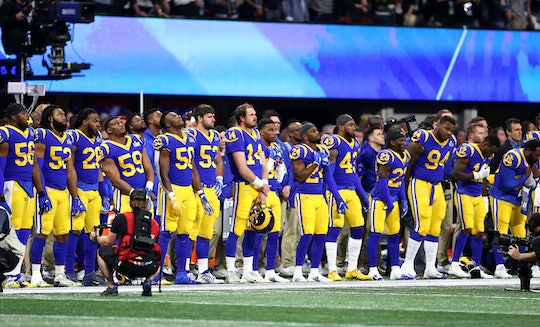 Players Didn't Take A Knee At The Super Bowl, But Some Opted For A Subtler Protest

With political tension running high at Super Bowl 53, all eyes were on the Los Angeles Rams and the New England Patriots to see if players took a knee at the Super Bowl. No players were seen on camera taking a knee during Gladys Knight's performance of the national anthem, but a few of the Rams didn't stand with their hands over their hearts. Some had their hands folded in front of them or behind their back, which may have been a subtler form of protest.

Back in May of 2018, the NFL announced a new policy that expressly forbid players from protesting during the national anthem by taking a knee on the field. Instead, players were given the option to stay in the locker room and off the field during the national anthem. Anyone protesting in plain sight on the field would be heavily fined. The policy drew such backlash that the NFL froze it less than two months later. In an August statement, according to SB Nation, league officials declared that no disciplinary action would be taken against players or teams who chose to protest on the field.

Players continued to kneel throughout the 2018 season, as USA Today reported, which was especially notable considering the movement's founder, Colin Kaepernick, didn't play this season. The first player to protest police violence against black lives by taking a knee during the national anthem in 2016, Kaepernick sparked a national conversation that quickly became much bigger than himself. According to The New York Times, he entered the 2018 season as a free agent and was never signed, eventually filing a grievance against the league for colluding to keep him off the field.

Kaepernick chooses to protest quietly, but many celebrities and activists are speaking up for him on Super Bowl Sunday. He tweeted a photo of Dr. Angela Davis wearing an #ImWithKap jersey, captioning it with a message of gratitude for the activist's support.

"I can’t explain how much it means to have the support of the Icon Angela Davis!" he tweeted on Saturday. "She has laid the foundation for myself and many others to fight against anti-blackness, and has never wavered! We love and appreciate you!"

Filmmaker Ava DuVernay also tweeted that she wouldn't be watching the Super Bowl in solidarity with Kaepernick. "I will not be a spectator, viewer or supporter of the #SuperBowl today in protest of the @NFL’s racist treatment of @Kaepernick7 and its ongoing disregard for the health + well-being of all its players," she wrote in a tweet. "To watch the game is to compromise my beliefs. It’s not worth it. #ImWithKap."

Meanwhile, there was a vibrant petition for Super Bowl 53's halftime act, Maroon 5, and their guest performers, Travis Scott and Big Boi, to take a knee during the halftime show. Among the highest profile supporters of this petition was Pink Floyd bassist Roger Waters, who pleaded with Maroon 5 to kneel in solidarity with Kaepernick, according to Rolling Stone, in a video and statement posted to Facebook.

Given the NFL's controversial handling of its players protesting the very same issues, it was understandable that viewers are confused by its mixed messaging. But it was also very clear that many weren't done with this meaningful protest.