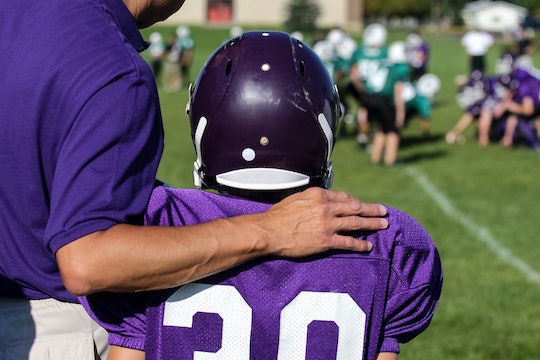 Figuring out what sports to sign your kids up for is no easy task, whether it's because of the travel schedule, the fact that they can't pick just one per season, or your 6-year-old has two left feet on the soccer field. A new study, however, suggests that there could be some serious health issues to consider, too, though. According to VA Boston Healthcare System (VABHS) and Boston University School of Medicine, playing tackle football is dangerous for kids under 12 years old, who could reportedly develop neurological and emotional problems. It's worth considering.

More Like This
How To Properly Clean An Inflatable Pool
The Avengers Campus Is Open At Disneyland: Everything You Need To Know
Parents Are Vaccinated, But Still Nervous About Their Kids Getting The Shot
Will Summer Camps Happen In 2021?

The effects of tackle football have recently become a hot issue, with even some states considering banning the game altogether for minors. This new research might back up those legislators. The researchers studied the brains of 246 deceased football players who had donated their brains via the Understanding Neurologic Injury and Traumatic Encephalopathy (UNITE) program. Of the 246 former football players, 211 had been diagnosed with chronic traumatic encephalopathy (CTE) and evidence of other brain diseases. The remaining ones didn't exhibit any symptoms of CTE, but did have evidence of other brain diseases, according to Eureka Alert. CTE, according to the Daily Mail, is a "degenerative brain disease caused by repeated hits to the head that result in confusion, depression, dementia, aggression and suicidal thoughts."

Of the 211 with CTE, 135 had played football at a professional level and others were amateur football players, but they all had one thing in common: they started playing tackle football young. The researchers concluded that for every year young that the person had started to play tackle ball, cognitive problems began 2.4 years earlier than people who had never played tackle football. Behavioral and mood problems began about 2.5 years earlier than others.

Put in simpler terms, playing tackle football before 12 years old means an "increased vulnerability" to the effects of CTE and other brain diseases and conditions, according to a statement accompanying the study from Michael Alosco, PhD, an assistant professor of Neurology at BU School of Medicine and an investigator at the Boston University Alzheimer's Disease Center and the Boston University CTE Center.

He added in the statement, "While participation in sports has important health and social benefits, it is important to consider contact and collision sports separately and balance those benefits against potential later life neurological risks."

Youth exposure to repetitive head impacts in tackle football may reduce one's resiliency to brain diseases later in life, including, but not limited to CTE. It makes common sense that children, whose brains are rapidly developing, should not be hitting their heads hundreds of times per season.

Last year, McKee led a study that examined over 100 brains of NFL players and found that only one did not show any signs of CTE at all, as reported in The New York Times. A separate study from Boston University earlier this year found that signs of CTE can occur in brains even if a hit doesn't lead to a diagnosed concussion, as reported by CBS Sports. In all, the evidence seems to keep building up that constant tackling and head hitting is likely causing CTE, which can have ripple effects in a person's life, especially if the depression, anger management, and suicidal thoughts go untreated.

There are four states — California, Illinois, Maryland, and New York — that are considering banning tackle football for kids, according to Sports Illustrated. Some states, such as Maryland, want to make kids wait until they are 14 years old to play tackle, as Sports Illustrated noted. New York's proposed bill is a little more lenient, banning tackle football until 12 years old.

A proposed 2017 bill in New York banning tackle football until 13 years old received no backing or support, according to the New York Daily News. In Illinois, lawmakers introduced the Dave Duerson Act to Prevent CTE in honor of a Chicago Bears defensive back who committed suicide in 2011 and was later found to have CTE, according to the Chicago Tribune. The bill bans tackle ball until 12 years old.

In New York, assemblyman Michael Benedetto reintroduced a similar ban on tackle football this year, saying, according to Mother Jones:

I firmly believe that when we see evidence of the danger to children, we need to act on that. There are laws that you need to use a car seat, wear a bicycle helmet. It’s the same principle.

Still, many of these bills have been proposed before in these states and are pulled before they ever get to vote, as happened recently in California. Many people have a real, cultural affinity for football and believe that head injuries are either the price a person pays for playing, that other sports have their dangers, too, or that the government shouldn't have a say in what sports people play, as reported by the Sacramento Bee.

When we're talking about kids' brains, placing restrictions on what sports they play or how they play them is definitely a conversation worth having. The research on what happens when kids hit their heads consistently is definitely in. What legislators, sports organizations, and parents do what all that information remains to be seen.