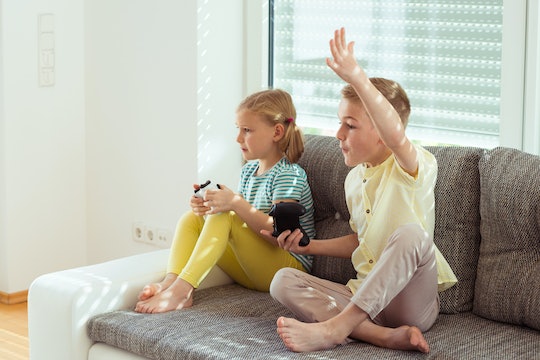 Playing Too Many Video Games Can Become A Mental Disorder, New Guidelines Say

The World Health Organization will name video gaming a mental health disorder in its forthcoming 11th update of International Classification of Diseases (ICD-11) in 2018. This means that too much Call of Duty could officially become recognized as a diagnosable health condition by doctors, healthcare workers, and insurance companies. To avoid those medical bills, parents should be keeping a watchful eye on their children's gaming habits and monitoring them.

The ICD-11 beta draft characterizes gaming disorder by "a pattern of persistent or recurrent gaming behavior (‘digital gaming’ or ‘video-gaming’)." This includes both gaming online (i.e. over the internet) and gaming offline. Parents should be looking out for their children's "impaired control over gaming (e.g. onset, frequency, intensity, duration, termination, context)," as well as any "increasing priority given to gaming to the extent that gaming takes precedence over other life interests and daily activities." The "continuation or escalation of gaming despite the occurrence of negative consequences" is also a behavioral pattern of those with gaming disorder outlined in the draft.

The draft continues that gaming disorder is severe enough to lead to "significant impairment in personal, family, social, educational, occupational or other important areas of functioning." The behavioral patterns associated with Gaming Disorder can either be continuous or episodic and recurrent, but they must typically be evident over a period of at least 12 months in order to be diagnosed.

A total of 72 percent of all teens play video games on a computer, game console or portable device like a cellphone, the Pew Center for Research reports. It's no surprise that so many adolescents are getting into it either. The global interactive media market generated $105 billion, and mobile is the most popular platform, according to a report from market researcher SuperData Research — that's up 12 percent from 2016. And contrary to popular belief, the same data suggests that the typical gamer has diversified into almost a 1:1 ratio in sex; gamers are 46 percent female in the United States.

Of course, the act of playing a video game in and of itself is not the problem. Video games have actually been noted for their help in improving hand-eye coordination, enhancing problem-solving abilities, relieving stress, connecting people and living out fantasies as covered, Forbes reported. Video games are increasingly being developed and used for health care purposes, too. While "the prospect of playing video games to help people may seem sort of like eating healthy molten lava chocolate cake," Forbes' Bruce Lee wrote, earlier this year Amblyotech filed for U.S. Food and Drug Administration (FDA) approval for Ubisoft’s video games Dig Rush and Monster Burner to help treat amblyopia (lazy eye).

And they're not only being in healthcare. In 2012, the Department of Education studied the use of the iPhone app Martha Speaks Dog Party in schools, and children aged 3 to 7 who used it every day for two weeks had widened their vocabulary by as much as 31 percent, according to The Guardian. Other sites like SumDog, BugClub and Mathletics, which incentivize development, have even been integrated into learning programs so teachers can monitor the reading and maths skills of their students. In 2012, researchers at Iowa State University discovered that "prosocial games" with titles that encourage players to cooperate and help each other actually increased helpful behavior.

Another indirect benefit of playing video gaming includes improved hand-eye coordination, according to 2016 research published in Psychological Science. In fact, it seems to improve all types of coordination. I once had the chance to chat with race car driver Nicolas Hamilton, who was born with cerebral palsy, a congenital brain disorder that affects movement, muscle tone or posture. Hamilton was told he’d never walk after he was born two months prematurely with Spastic Diplegia, one type of Cerebral Palsy that makes his legs and feet muscles spastic and stiff. His dream was to be a race car driver and, after spending a lot of time developing his abilities on a simulator, he made the transition from his wheelchair to the cockpit of a race car. He gained notoriety in the online racing community, winning eSports championships left and right, before becoming the first driver with a disability to compete in the British Touring Car Championship (2015).

So, yes, science has suggested that good can come out of gaming, but a 2009 study published in Psychological Science found that about 8.5 percent of American youth from 8 to 19 years old exhibit pathological video game use, which affects their school performance and other critical parts of their lives. Because the ICD-11 beta draft categorizes gaming disorder under "disorders due to addictive behavior," parents should perhaps give their children the same age-old advice their parents probably gave them: everything in moderation.

Experts suggest that children shouldn't be exposed to more than two hours of screen time a day, and they advise parents to use parental controls on their tablets, smartphones, consoles, or computers to restrict access if they can't monitor their children's activity directly, according to the BBC. Kids under 2 years old shouldn't have any screen time at all, according to Forbes.

It's also important that, as more girls start playing video games and gaming giants like Sony, Microsoft, and Nintendo start catering to them, too, parents monitor all of their children, regardless of sex. The Pew Center for Research found that, while most parents know what games their children are playing and are checking ratings, parents of boys are more likely to intervene in game play than parents of girls.

All of this is nothing new; it's just that WHO is finally making gaming disorder officially diagnosable and parents are being warned to monitor more and more. Heck, revoking video gaming privileges seems like the 2017 version of when '90s kids' parent's would take away their Tamagotchis after they'd spend more time playing with those pets then their real pets.