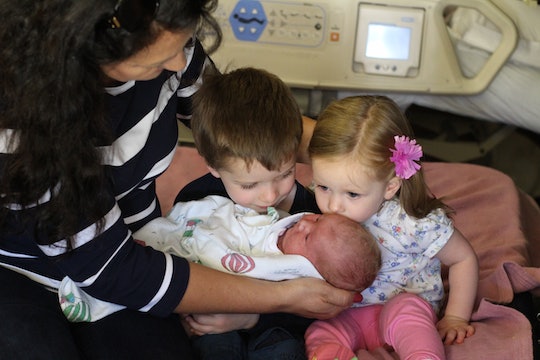 Please Don't Ever Touch My Kids Without My Consent

When my baby was born, I thought I was prepared to take him out into the world for the first time a few weeks later. I had packed everything imaginable in my diaper bag: I had a spare change of clothes, wipes, diapers, extra binkies, blankets, nursing covers, powder, lotion, swaddles, hand sanitizer; the works. It took us over an hour to get ready, and of course there was a diaper situation right as I buckled him in his car seat. However, once we were out for our first day back in the real world, I quickly realized I wasn’t ready at all, mainly because I was not at all prepared for the barrage of people who would think it was OK to touch my baby without asking.

Even though all throughout my pregnancy I'd only dealt with one very adamant stranger touching my rounded belly, touching my newborn baby was a whole different story. Apparently my son’s need for personal space and my need for people to back the hell off came secondary to the whims of strangers who thought it was great fun to poke and prod a cute infant as their frazzled mother was just trying to buy some goddamn groceries.

The problem is that no one should ever think it’s OK to touch my kids without asking me first. When they are too small to consent to being touched by someone else, then that responsibility for consent falls on me, their mother, not the unknown person who really wants to “squeeze those little cheeks.”

While the people I actually know and love would come to our home and ask if they could hold him after slathering their hands with sanitizer to ensure my peace of mind, random folks all over town didn’t seem bothered to extend the same sort of courtesy. When an older woman in a grocery store decided to pull back the blanket that was swaddling my baby’s feet so she could get a better grab at them, I quickly positioned myself between her and my infant, asking her to please not touch my baby. She huffed indignantly before walking away, as if my request for strangers to keep their questionable hands off my newborn was the true problem here. That denying her the joy of interacting with my infant was unfair. It wasn’t.

The problem is that no one should ever think it’s OK to touch my kids without asking me first. When they are too small to consent to being touched by someone else, then that responsibility for consent falls on me, their mother, not the unknown person who really wants to “squeeze those little cheeks.” You don’t get to make that choice, I do.

And who, by the way, doesn’t get that touching strangers’ kids is not an OK thing to do? Much in the same way that some forward woman shouldn’t have lunged to rub my pregnant belly, no one should feel entitled to lunge at my child as if he is communal property simply because I happen to be in a public space. That is not how people and children work. What's more, that's not at all how the real world works.

Being a new mother was anxiety riddled enough without having the added worry of strangers touching my baby without asking, possibly infecting him with whatever germs lay writhing on the shopping cart or park bench they were handling just moments before. I became so worried, in fact, that I started to avoid taking my infant out in public. I'd actually wait until my husband was home at night to go grocery shopping. I eschewed church, saying it was "too much stress with the baby," which was not really a lie when you think about it. I wanted to keep him safe and since so many people seemed unconcerned with even the most basic boundaries, I lived like a hermit with him for much of his first year.

Even now that my kids are older, I am still amazed by the number of people who will try to touch them without asking — grabbing for the beautiful locks of my daughter’s long hair or placing a frightening hand on my son’s shoulder unexpectedly. No one should feel like they have that right to my children’s personal space, not even me. I still get the same indignant look every time I tell someone to please not touch my kids. As if I’m the one in the wrong — the one who's overreacting.

Screw that. If you don’t want to be publicly shamed for stepping out of bounds, try showing me and my kids the decency of asking for consent first. And maybe ask yourself why you feel so entitled to the space of others. Maybe even try to see things from my perspective.