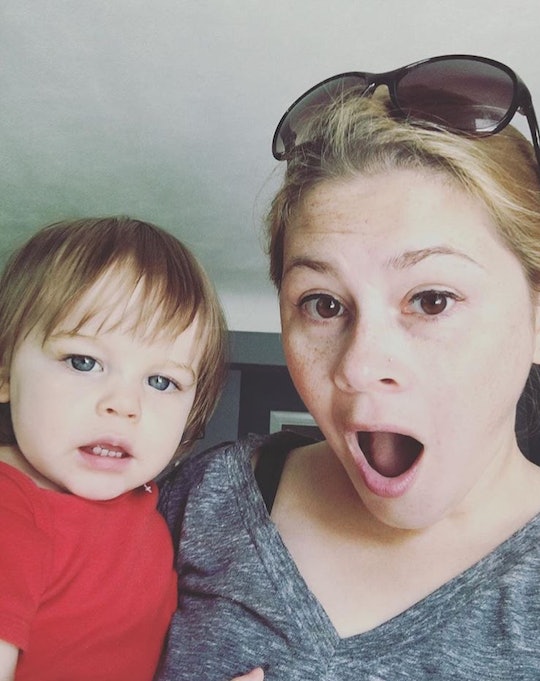 Please Shut Up About Other Parents' Car Seats

Car seats: they are hard to install, hard to clean, annoying to take a kid in and out of, and utterly necessary. Their use is bound by rules and suggestions, and every time you read up on said rules and suggestions, it can seem like someone is saying something other than the last thing you read. "Face the child forward until they are 19.7 pounds." "Face the child backwards when they are 15.2 pounds." "Face the child forward until they are 12 inches in length." "Face the child backwards until he is 11.98 inches in length, 17.2 pounds, and able to master the lyrics to the Gilligan's Island theme song." The rules seem like they're always changing, if ever so slightly. It can feel hard to keep up.

But after scanning myriad articles and safety regulation pamphlets, here's what I know for sure: the majority opinion is to keep a kid facing backwards until they reach 40 or 50 pounds (depending on the car seat manufacturer), or when they're at least 2 years old. Statistics show that the risk of serious injury is far, far less when they are facing backwards within that age and weight range — in fact, it's almost five times less, according to the Car Seat Lady. So with that said, why the hell do people keep suggesting I turn my 2-year-old around?

My son Oliver is 2 years old, which is technically the minimum age for forward-facing, but he's definitely not the minimum size. He’s normal, or average — or maybe even a little smaller than that. His father and I are on the short end of the height spectrum, so it’s not like we’re dealing with a whopper of a kid. Maybe kid giants do need to be turned around at age two, but we’re dealing with a small-to-normal-sized 2-year-old, whose little bones could still get squashed to smithereens at certain impact.

It honestly boggles my mind why no one else wants to err on the side of caution and keep him rear-facing for at least a little longer.

With this in mind, I'm not sure why everyone keeps telling me to turn him forwards. My husband, for instance, keeps yakking about how happy forward-facing children are. He saw one on our block last night! Pointing out the window at the stars! Every time he mentions it, I spew the stats at him and watch him sulk. He knows he's wrong, but still, he keeps saying that everything will be OK if we turn him around.

My mother-in-law is worse than her son. Every time she sees Oliver in a vehicle, she asks why in the world we haven't flipped him forward yet. "It's not safe," I say." Then, a week later, she asks again. Even my own mom has put in her two cents on the subject. She's constantly reminding me that they didn't even use car seats with us when we were growing up, "and nothing ever happened." But just because my mom didn't accidentally kill us doesn't mean she did the right thing by not putting us in car seats.

It honestly boggles my mind why no one else wants to err on the side of caution and keep him rear-facing for at least a little longer. No one around me seems to be scared of the possible drawbacks to the turn-around, and I want to know why. Almost every time he’s in a car and traveling at high speeds, I have horrific thoughts of us getting into an accident and his bones being broken. I probably have these thoughts too often, but I'd rather have them and play it safe than assume nothing will ever happen to him and take chances with his safety.

Oliver has been forward-facing a few times, albeit for really short rides. And I will admit that my goodness gracious, it was a much more pleasant trip. He ooed and ahhed at the cows and trees and the birds and the clouds passing by his windows. He screeched "Hi!" to oblivious people in car windows next to him. He delighted in the world around him, instead of getting irate at the sight of his own two knees and feet. It was genuinely fun to hear him so joyful during a car ride. But guess what? Fun and safety don’t often go hand in hand. I don’t care how delighted my toddler was by his direct line of vision. I’m keeping him facing the seat back until his weight dictates differently. And I’m tired of defending it.

I think the core of the issue is that the people around me tend to see the glass half full. They think bad things only happen to other people. I think bad things happen to everyone, and I’m going to try to avoid them any way that I can. That doesn’t mean I think my kid is going to get into a car accident, or that I now have permission to drive like a wild a*shole. It means that I acknowledge the tiny bit of power we have in this insane life. We can prepare for the worst, and hope for the best.

I hope he likes the look of his knobby little knees, because he’s going to be looking at them for quite a while.

At this point, I have rejected the suggestion to turn our child around too many times to count. Merely hearing it makes me want to accuse the suggestion-maker of not loving my child. I know that’s not the case, but I also know that I will protect my little baby in whatever way I can, for as long as I can. I hope he likes the look of his knobby little knees, because he’s going to be looking at them for quite a while.