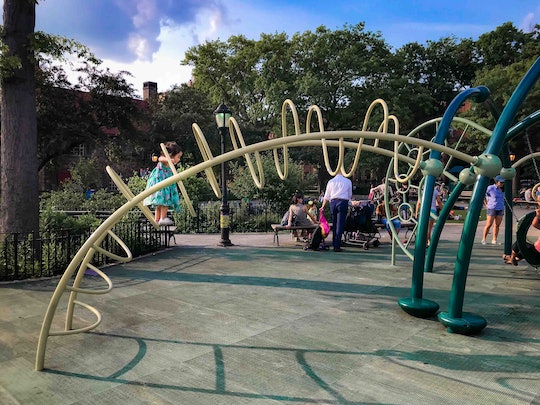 It’s nearly the end of another exhausting day, and I’ve taken my toddler and newborn daughter to the playground for the umpteenth time this week in an effort to get the older one tired enough for bedtime. As I bend my head to soothe my fussy baby in her carrier, my toddler exploring on her own several yards away, I hear a voice at my elbow say “Don’t you think she’s going a little too high?”

I look up to see an overly solicitous woman nodding her head in my daughter’s direction as she clambers up a chain-link ladder. I give a practiced smile to the woman and say, “That’s OK, thanks. She’s been climbing that thing for months now.”

This has become a regular occurrence. My daughter is on the small side for her age but has always been physically advanced and adventurous. Like all toddlers, she’s very curious about her surroundings and eager to explore, and my husband and I are happy to let her. Friends have jokingly observed that we treat our first-born daughter like a third child — meaning no hovering, no fretting, no anxiously excessive Be carefuls. This didn’t happen overnight. Of course, when she was really young, my husband and I did our due diligence by helping her up the ladder, then offering a supportive hand, then standing a few inches away, then farther away, as our daughter navigated one tricky piece of playground equipment after another. We learned that if we demonstrate our trust in her and that we have confidence in how she moves on her own, she learns to trust and have confidence in herself. We make an effort to be encouraging when she explores and calm when she encounters the inevitable bump or fall. And I believe it’s our openness that has emboldened her to go a little farther than people around her are prepared for.

I’ve experienced people coming out of shops to yell at me because they saw my daughter dart ahead of me as we walked down the block.

As confident as I am in her, the constant input from other people, especially other parents, that I need to intervene or monitor her more closely, rankle. Their dubiousness over her physical abilities makes me doubt not my daughter, necessarily, but my parenting. Do they see something I don’t see? Am I being particularly sanguine in my approach? Am I supposed to be more scared for her? I wonder if my nonchalance might read as negligence, bracing myself for someone to mistake me for a nanny and threaten to tell her parents (as a woman of color with a mixed-race daughter who could pass for white, I’ve experienced this kind of policing before). I’m never more aware that the biggest critics of mothers are other women than when I’m on the playground, watching my daughter play from a distance that is apparently up for debate.

I’ve experienced people coming out of shops to yell at me because they saw my daughter dart ahead of me as we walked down the block. They don’t realize I’ve worked hard since she was very young to let her know that she can go at her own pace on the sidewalk, but she must always stop and hold my hand before she crosses the street. I know that these women (and they’re almost always women) mean well. To them, they’re just looking out for other children in the community. And I’m sure none of them are intentionally trying to make me feel like a bad mother. If I focus on their concern rather than the perceived condemnation, I sometimes feel grateful for the second pair of eyes. But there’s a fine line between supporting a fellow parent and shaming them. And I realize that part of my defensiveness stems from my self-doubt, which is activated by and directly correlates to the level of aggression coming from the person criticizing me.

Is it me, or is it our culture? Americans often conflate morality with good parenting, judging mothers particularly harshly over any sign of unnecessary risk-taking. And this pressure to constantly surveil one’s child — and to judge parents who don’t do the same — seems to be a particularly American phenomenon, a chokehold that seems not to have quite the same grip on parents in other countries. There also seems to be a gendered response to how people communicate their concern about my daughter’s adventurousness. When I first mentioned the comments I would receive about Jade, my husband reacted with surprise — no one has ever said anything to him or second-guessed his parenting. When we’re all out at the playground together and I’m watching from the sidelines, I see admiring smiles from other mothers as he plays rambunctiously with our daughter, chasing her up high ladders and down steep slides, giving words of encouragement as she explores on her own. Is it because people expect that this is the correct way a father parents? Studies have shown that oxytocin levels rise in males when they engage in rough-and-tumble play with their children, as opposed to mothers, who experience a similar hormonal effect when immersed in nurturing, affectionate behavior. Do people assume it’s only fathers who engage in and encourage physical risk-taking? Or is it the fact that he’s engaging at all, one of those praiseworthy dads who score points just by showing up and paying attention?

Whatever the reason, the occasional doubt I feel pales in comparison to the pride that takes over when I see my daughter conquer another piece of playground equipment. I love that she is brave and curious and, at least for now, unconcerned with other people’s assessment of her.

The best parenting advice I’ve ever heard is: if there were one right way to parent, everyone would do it that way.

I want her to keep trusting herself, and I know that to do that, I ultimately need to model trust in myself and in my parenting choices. I do not want to be a fearful mother. I want to teach my daughter to be resilient and to trust her to find her way, first physically as a baby taking her first steps, then socially and emotionally as she develops into a fully engaged human being. Isn’t that a goal all parents can support?

The influence of other parents on our own parenting can be immense, even inhibitive. Concern can lead to judgment, which can lead to shaming, or even more dire consequences. On the one hand, I fervently hope other people will recognize that I have thought very deeply about how I’m choosing to react to my daughter’s risk-taking, and that the positive results will be apparent in her confidence and poise. On the other hand, what kind of mother would I be (and relatedly, how is it a productive use of my energy and attention) if I’m consumed with thinking about what other people think of me? There’s that famous adage, “Dance like nobody’s watching.” I’ve resolved to parent like nobody’s watching. Like no one else’s opinion about my parenting matters. By the same token, I make a concerted effort to give other parents who have a different approach with their kids the benefit of the doubt as well. Because the best parenting advice I’ve ever heard is: if there were one right way to parent, everyone would do it that way.

I’ve found my way, the way that works (or seems to be working) for my family. Yes, my daughter is probably one of those kids who is going to endure a broken bone or two, who constantly has scraped knees and elbows and is often in need of a Band-Aid (she prefers the ones with Disney Princesses on them). But I hope other parents can also see what I see: a girl who, like her mama, is doing her best to navigate the world, learning from her mistakes, then launching herself fearlessly at the next challenge to climb.