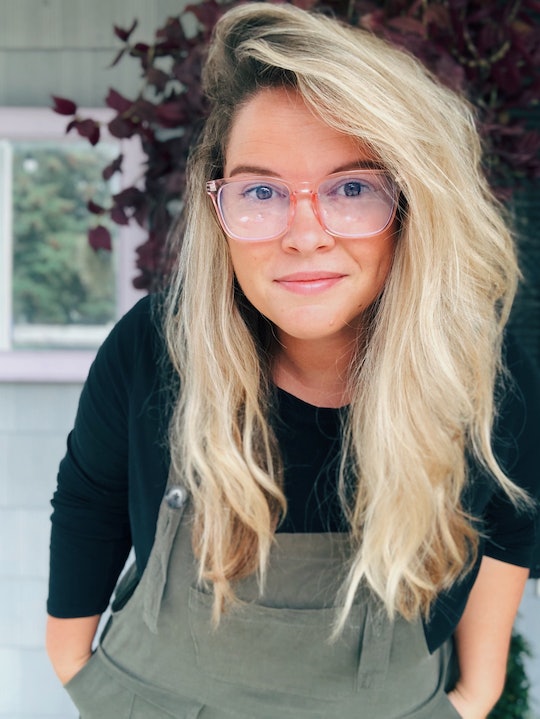 Who here has not left their body momentarily while their toddler orated loudly about the dinner they would prefer to be eating? The question of where we mothers go in that moment is best answered by artists. A great poet can find a world in that place. One such person is Kate Baer, author of the forthcoming What Kind Of Woman and a poet you probably already follow on Instagram. Also, of course, a mother, trundling her philosophical rickshaw along with four children (9, 6, 3, and 1) bouncing around in the back.

"Do not be angry. Do not start singing. Where is the butterfly I drew?" goes "What Children Say," a near-perfect frame of writing that flattens the whines and wails of a child into a quiet call, an acknowledgement of the chaos all around us, child and parent, as we sit in our homes with an infinite universe outside.

"The biggest thing that I ever want to do," Baer tells Romper over the phone from Pennsylvania, "is say the thing we're all thinking but that we don't want to say." This is what she did in her essay "When You Are Tightly Wound," reposted from her blog on Huffington Post in 2014, where it went viral and got her an agent.

As a mother of four, her process is to move forward bit by bit. Typically, she works in "a Panera," going over and over her words until she has refined them into something transcendent. "I kind of look crazy, I have my headphones on and I'm just kind of talking to myself reading it out loud and just trying to hear it, kind of like a song," she says.

To catch the ideas, she will often email herself as she is going through her day — drafts of "little things" and details that would otherwise be forgotten. "I have, you know, 55 started pieces," she laughs, and what better metaphor for raising children?

Her poems look effortless, but it's the delay that creates meaning, the intensive process.

After writing something, "I read it over and over and over again and then I'll try to take a day off or two of that particular piece to give it a minute," explains Baer. "You know if you repeat something too much stuff starts to sound like nothing — you don't even know what you're saying." (Yes I do, Kate.)

Her advice to mothers and thwarted artists trying to write something is simple: do the work. Allocate yourself time to do that work. Edit and edit and edit.

Consider the way she shears off these phrases with line breaks in "Deleted Sentences": "Sometimes I wonder what would happen if you / died and I had to write a eulogy while lost in my / grief. What would I say? And who would take out / the trash bins on a Sunday or hold our / children through their fever dreams?"

Deleted Sentences is "probably" the poem she has had the strongest response to; there are other poems that will be in her book but haven't been shared online. "When you're writing about female rage in a very specific way, it's not as maybe not as consumable online as it might be in a book," says Baer.

As she is speaking, an immense thunderstorm rolls in over New York and Pennsylvania, shaking the trees and breaking the phone connection. For once, the weather seems to agree with us, living on our islands and looking out the window at blossoms and tulips that seem not to care that our lives are on hold. It feels as though we have the most to say as mothers in this strange era, and no time to say it. Plus, there has been so much written about motherhood, it can feel hard to carve out a space.

"It's very hard for me sometimes to walk up against the whole mommy online movement and and say, what's something new that I'm saying here? What do I have to bring to this arena?" says Baer.

Although her poems are sometimes seemingly addressed to her husband, or her children, she is primarily writing, she says, for the women in the trenches.

What Kind Of Woman is available for pre-order from Harper Perennial and comes out in November.

More Like This
It's A Beautiful Day In Jenny Slate’s Neighborhood
Jenny Slate Played Our Parenting Edition Of Never Have I Ever & Here’s What We Learned
How Do I Rediscover My Sexuality When I’m Completely Touched Out?
Ginger Zee Had A Perfect Response After A Troll Asked Her "Who's Raising Your Kids?"