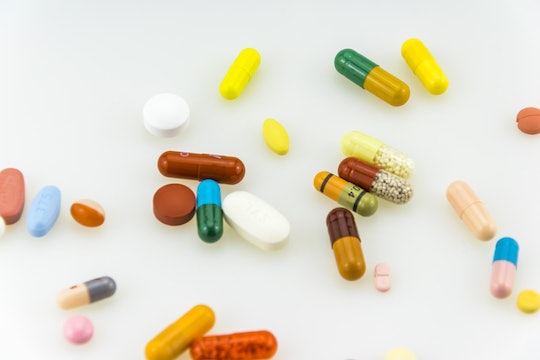 While the thought of having to call Poison Control because your child has been exposed to something dangerous is nightmare material for just about any parent, the emergency service should definitely be on your speed dial. Many parents also make it a habit to leave the number with a babysitter in the event that a child ingests something that could make them sick. While most parents hope they never have to call the number, it turns out that many do — and the reason is pretty scary. Poison Control gets a call about kids & opioid exposure every 45 minutes, according to a recent survey.

The American Association of Poison Control Centers is an emergency service in the United States with 55 nationwide locations that can assist anyone who may have been exposed to something poisonous. Callers can get medical advice 24 hours a day, 7 days a week, 365 days a year by calling the number, which will connect them to a regional center. It's free and confidential to call, and can help parents figure out if they or a loved one needs to seek medical attention. PoisonControl.org also offers an online service that people can use, but the website notes that it's only safe to consult the online tool if symptoms haven't developed yet. The website also offers a Pill Identifier service that can help users in the event that they have discovered medications in their home and they can't tell what the medications are, what the meds are for, or if they could be dangerous.

According to Safe Kids, medications in pill form, tablets, or capsules can often be enticing to children because their shape and colorful appearance can make them look like candy. If pills are also kept somewhere that a child might expect to find a treat — like in a purse or bag, or hidden in a drawer or dresser, it can make the likelihood of accidental ingestion all the more likely. While many bottles have "child-proof" caps, pills that come in blister packs can be much easier for a kid to wrangle.

The National Poison Data System updates every eight minutes with information about calls made to the service around the United States. In 2015, 47 percent of calls made to Poison Control concerned children under the age of 6 years, and 70 percent of calls were made from home. A recent survey conducted by the Center for Injury Research and Policy and the Central Ohio Poison Center at Nationwide Children's Hospital looked at the number of calls made to Poison Control from 2000 to 2015 concerning children who had potentially been exposed to opioids, and found 188,000 calls were placed during that 16-year period.

That breaks down to an average of 32 calls a day — or one every 45 minutes, if they were spaced evenly. The survey reported that most of the exposures happened in children under the age of five (60 percent), and the rest were in teens. The most common opioid that kids and teens were exposed to was hydrocodone, a form of the painkiller codeine. According to the DEA, hydrocodone is the most prescribed painkiller in the United States. Other common opioid exposures were to oxycodone (also known as Oxycontin), and codeine, a painkiller that is also sometimes prescribed to help reduce coughing, according to the FDA.

All three drugs are narcotic painkillers that can be prescribed by a doctor, often after things like dental work or surgery. According to the survey, the calls made to Poison Control mostly came from homes where a child had ingested the medications unintentionally. The calls concerning teenagers, however, were often from intentional exposures — in the 16-year period of the survey, opioid-related suicides in teens rose by 50 percent.

Given that many areas of the United States are experiencing an unprecedented opioid crisis, it's not surprising that these exposures happen. The survey did note, however, that since 2009, exposures have started trending downward — in large part due to awareness and prevention campaigns. The exception was exposures to the drug buprenorphine, which is used to treat those who are recovering from heroin and other drug addictions. These exposures have not considerably lessened, and they are often very serious — requiring a hospital admission, according to the study's findings.

On average, 91 people die every day in the U.S. from an opioid overdose, according to the CDC, and prescription opioids are considered to be a major force behind the epidemic. That being said, children only account for less than 1 percent of deaths from opioid overdose in the U.S., according to 2014 data from the Kaiser Family Foundation. Prevention campaigns and the work of Poison Control has certainly contributed to those numbers, but as long as the epidemic persists and children and teens have access to opioids, keeping them safe from accidental and intentional exposure will need to continue to be a top priority not just for parents, but for everyone who is prescribed one of the medications.