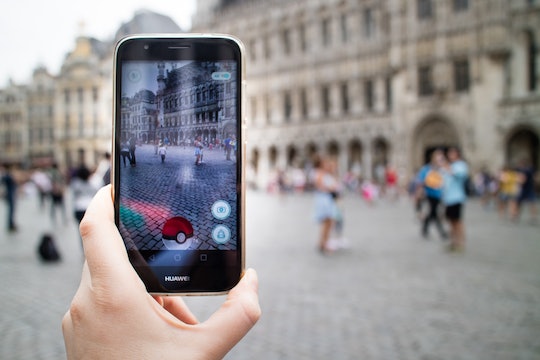 Pokemon Baby Names Are Becoming A Thing, & Here Are The Most Popular

The love that the entire world seems to have right now for "Pokemon Go" can be kind of hard for someone who has never played it to understand (I'm forbidding myself to download it), but I guess I can see why it'd be so addictive. You're outside, you're exploring, you want to make sure you "catch them all" (is that the right term?). Concerns about safety notwithstanding, there are probably much worse things people could be doing with their time than playing "Pokemon Go" on their phones. But now it appears that Pokemon baby names are becoming a thing, and that, I'm pretty sure, is a sign that maybe things are getting a little out of hand.

According to Gizmodo, pregnancy and parenting website BabyCenter revealed in a news release that more parents and parents-to-be registering on their website have chosen to give their children names found in the crazy-popular game. Although it's unlikely that there will soon be lots of little Pikachus, Squirtles, and Jigglypuffs being pushed around in baby strollers, BabyCenter has noticed an increase in baby girls named Eeevee (a name which has risen in popularity 1,377 spots since last year), and Onyx (up 2,184 spots). And for boys, Ash — aka, the Pokemon trainer and protagonist of the anime and manga series — has also seen a popularity surge, rising 248 points, according to Buzzfeed.

Of course, none of these names are totally out-there, or strictly "Pokemon Go" specific. Eeevee, while an unorthodox spelling, is similar to the already-popular girls names Evie and Ivy, while Onyx has risen fairly steadily in popularity over the past 10 years, according to BabyCenter data (though it still hasn't cracked the top 1000 names in the U.S. in any year as far back as 2000, according to the U.S. Social Security Administration website). The name Ash, however, currently sits at #891 in terms of popularity on BabyCenter for 2016, making it the first year since 1996 that it's entered the top 1000 names.

According to BBC News, the top baby names related to "Pokemon Go" (in order of popularity) appear to be Roselia, Onyx, Star, Eevee, Ivy, Ash, and Shay.

Though the idea of a "Pokemon Go"-inspired baby name might seem out there, it's really not entirely surprising. After all, as BabyCenter global editor-in-chief Linda Murray explained in a news release,

Parents are always looking to pop culture for baby name inspiration and, right now, it doesn't get hotter than Pokemon Go. It's possible that parents' enthusiasm for the game will reignite their love for the brand and spark a full-fledged naming trend.

Now that is dedication to a game.