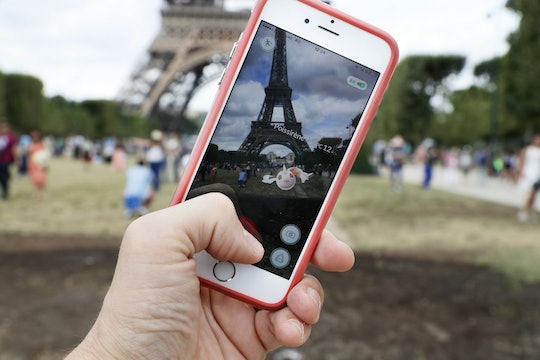 Trainers around the world are getting creative to hatch eggs in "Pokemon Go." From fastening their phones to dogs' collars to attaching them to toy trains, trainers are doing whatever they can to rack up the 2, 5, or 10 kilometers necessary to find out what potentially rare Pokemon is hidden inside an egg. Despite the numerous inventive solutions listed online, it may be that the most reliable hatching method is the old-fashioned one: walking. For players unfamiliar with the metric system, the "Pokemon Go" kilometer-to-miles conversions offer a better understanding of exactly how much distance they'll need to cover in order to welcome a new Pokemon into the digital world.

Hatching eggs can be time-intensive, but the distance requirements aren't overwhelmingly challenging. Two kilometers is about 1.2 miles, 5 kilometers is about 3.1 miles, and 10 kilometers is about 6.2 miles. How long will it take to hatch Pokemon eggs on foot? If the ground is flat and the terrain is easy to cover, Reference estimates that it takes "17 to 20 minutes" for most individuals to walk a mile (though someone walking fast can do it in about 13). Players taking a casual stroll around the neighborhood can expect to hatch a 2-kilometer egg in 20 to 25 minutes. Hatching a 5-kilometer egg requires about an hour on foot, while a 10-kilometer egg demands almost two hours of walking.

Can "Pokemon Go" players hatch an egg while jogging or cycling? according to The Telegraph, the game counts any distance covered at under 20 miles per hour towards hatching eggs, so trainers are good to hop on a bicycle or finally tackle a Couch to 5k program.

Unfortunately, "Pokemon Go's" distance tracking isn't necessarily as reliable as a pedometer; ComicBook.com reported that there are several critical things for players to know before they lace up their running shoes. First, in order to work toward hatching an egg, the "Pokemon Go" app has to be open while a trainer is in motion; they can run a playlist through iTunes or Spotify in the background, but closing out the app to scroll through Instagram will stop the app from calculating distance traveled. It's also important to know that "Pokemon Go" doesn't track every step. The app actually relies on a straight-line measurement to determine how far a trainer moves from their original location. For example, if a player walks from one end of an amusement park to the other, the app wouldn't count all of the twists and turns taken during the journey and would only measure the distance from point A to point B. In order to ensure the app tracks as much of a trip as possible, ComicBook.com suggests interacting "with the app's location features" each time a player changes direction. It may not count every bit of distance covered, but it will likely ensure that a person's journey is more accurately tracked. Even so, it's best to stick to a path that's as close to a straight line as possible; that could mean exploring a local trail or even window shopping at an outlet mall.

If it's just too hot to spend the afternoon outside, there are other ways to rack up kilometers: there are a ton of options for hatching eggs in "Pokemon Go" that don't require a big hike (for trainers, getting stuck in traffic can be a good thing!). One big tip: keep multiple incubators in use at the same time so that not one minute of travel time goes to waste.