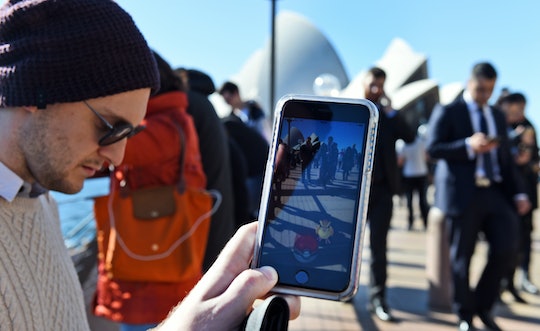 Pokemon Go Safety Tips For Gamers Of All Ages

It's safe to say that "Pokemon Go" is taking the world by storm. What isn't so safe is playing the game itself. Sure, it's essentially a video game, but it's not like other games that keep you cooped up indoors. It's being called an "augmented reality" game because it requires players to go out and interact with the real world. While there are definite pros to getting people out in their community, there are cons, too, and most have to do with safety concerns. Already there have been reports of injuries and foul play because of the game. So, to keep aspiring "Pokemasters" out of danger, here are some "Pokemon Go" safety tips for gamers of all ages.

The basic premise of the game is simple: the world is full of little creatures called "Pokemon" and you want to go out and catch them (catch 'em all, to be exact). It's long been a desire for lovers of the original "Pokemon" that gamers have to travel the world to find their prizes, so this release is a dream come true for many fans. So much of its popularity can be attributed to the simple fact that it's fun, and that fun is addictive. As players level up, it's hard not to feel drawn into the game and to want more and more "Pokemon." That was true for the original games, and it's true this time around. But, it's gotten ambitious players into some scrapes.

According to ABC News, one player was recently stabbed while playing the game when he approached someone who he thought was also playing. The victim said in his interview that he continued playing after he was stabbed. Also according to ABC News, police officers arrested a sex offender for playing the game with children. There have also been reports of a number of robberies as a result of people's obsession with the game, according to CNN. The Los Angeles Times reported that two people walked off a cliff while playing (they only had minor injuries, somehow).

New York City Police Commissioner Bill Bratton told ABC News that he had growing concerns about the game. He said:

That craze is one of the stupidest ones that I've seen, don't understand it, don't intend to understand it. It has no appeal to me and at the same time people are putting themselves at great risk being lured into certain neighborhoods that they have no knowledge of ... and subjecting themselves to potentially being victims of crime.

Whether kids or adults are playing, it's important to use good judgment and remember that it is just a game. It's not worth putting yourself in dangerous situations. To keep that from happening, here are some tips.

Tell Someone Where You're Going

Be sure to let a friend or family member know when you're going out and when you plan on being back.

Play With A Friend

It's a good idea to take a friend along, especially if you're going to an unfamiliar part of your community.

Wear A Hat And Stay Hydrated

It's hot out there. Whether you're planning on staying out for a long time or not, plan for the extremes. Bring water and a hat and sunscreen, just in case.

Don't Play While Driving, Biking (Even Walking Can Be Dangerous)

Looking down at a screen while in motion is taking your life into your hands. Don't do it.

Even if there are the rarest of rare "Pokemon" beyond that fence, just don't go. Turn around.

Be Wary Of Strangers

While it's great that the game is bringing people together, don't let your excitement for the game get the better of you.

If players follow these guidelines, they should stay safe while having a good time getting out and about. It may be "augmented reality," but it's still reality, with all its risks and dangers.