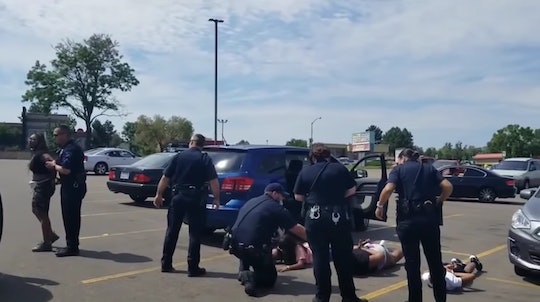 What was meant to be a fun day at the nail salon quickly turned into a terrifying and traumatic experience for a Black family in Colorado. Aurora police have since apologized for detaining a Black mother and several children at gunpoint on Sunday after mistaking her SUV for a motorcycle that hand been reported stolen. While police have blamed the incident on the department's license plate scanner and how officers are trained to respond to suspected stolen vehicles, many have deemed the incident the latest example of systemic racism in law enforcement.

"I have called the family to apologize and to offer any help we can provide, especially for the children who may have been traumatized by yesterday's events," Vanessa Wilson, who was named Aurora's chief of police late Monday, said in a statement. "I have reached out to our victim advocates so we can offer age-appropriate therapy that the city will cover."

According to CNN, police surrounded Brittney Gilliam's SUV with their weapons drawn on Aug. 2 while she was parked in the parking lot outside a nail salon she'd intended on visiting. Officers ordered Gilliam, her 6-year-old daughter, 12-year-old sister, and 14 and 17-year old nieces to exit the vehicle and lay on the ground. Gilliam told CNN officers refused to divulge why they had detained the group until she, her sister, and one of her nieces had been placed in handcuffs.

In video of the incident captured by bystanders, the children can be heard crying and screaming while they lay on the ground at police officers' feet as they watch an officer lead Gilliam away in handcuffs. "I want my mother," Gilliam's daughter sobs at one point.

In an interview with ABC affiliate Denver 7, Gilliam said police didn't ask her for her license and registration despite reportedly detaining her on suspicion of a stolen vehicle. According to the news outlet, police later acknowledged the stolen vehicle they were looking for was not an SUV like Gilliam's but a motorcycle with an out-of-state license plate similar to the one on Gilliam's vehicle.

The Aurora Colorado NAACP chapter condemned Sunday's incident as "another sign that the problems within Aurora Police Department are systemic and embedded in their policing philosophy" in a statement released on Facebook. "This family will be traumatized for the rest of their lives. The children crying on the ground while being handcuffed on concrete during a hot summer day is inhumane and reinforces why we say #Blacklivesmatter."

Wilson, however, has pushed back on claims the incident was an example of Aurora police racially profiling a Black family, telling Denver 7 Gilliam's SUV had been reported stolen in February. "I totally understand that anger, and don't want to diminish that anger, but I will say it wasn't a profiling incident," Wilson told Denver 7. "It was a hit that came through the system, and they have a picture of the vehicle the officers saw." An attorney for Gilliam told CNN Aurora police had returned Gilliam's SUV to her in the day after she'd first reported it stolen in February and the issue had been closed.

On Monday, Wilson appeared to further defend the responding officers' actions by claiming they had simply done what they are trained to do in situations involving suspected stolen vehicles. "We have been training our officers that when they contact a suspected stolen car, they should do what is called a high-risk stop. This involves drawing their weapons and ordering all occupants to exit the car and lie prone on the ground," Wilson said, before adding that Sunday's incident had caused the department to re-examine that training.

"We must allow our officers to have discretion and to deviate from this process when different scenarios present themselves," she said. "I have already directed my team to look at new practices and training."

The Aurora Police Department has previously come under scrutiny after Elijah McClain, a 23-year-old unarmed Black man, suffered a heart attack and was declared brain dead after being stopped by officers while walking home from a convenience store in August 2019. According to The Cut, Aurora officers placed McClain in a chokehold and had first responders inject him with ketamine. McClain died after he was taken off life support.

In July, Wilson announced three Aurora police officers had been fired and a fourth had resigned after it was discovered two of them had posed for a photograph in which they mockingly re-created the chokehold used on McClain and shared them with the other officers.

More Like This
Hero Who Tackled Colorado Gunman Was At Nightclub With Family To See Drag Show
"Corn Kid" Handed Out Over 40,000 Cans Of Corn At A Food Bank Ahead Of Thanksgiving
Candace Cameron Bure's Response To "Traditional Marriage" Backlash Is Also Getting Dragged
No One Is Angrier About The Taylor Swift Ticket Disaster Than Moms