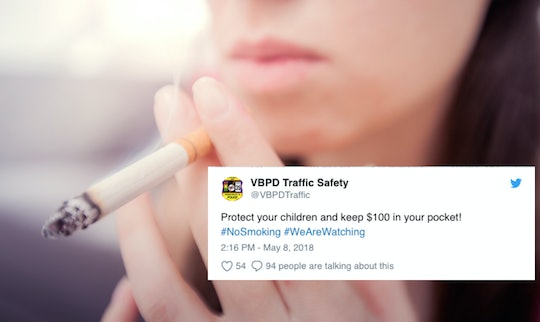 Police Are Fining Parents $100 For Smoking With Their Kid In The Car, & Twitter Is Divided

It's always a touchy subject when the law gets involved with how parents choose to raise their kids, and a little-known law might just reignite that debate. The Virginia Beach Police Department recently tweeted a warning to parents after they issued a driver a $100 ticket for smoking with their kid in the car, and the comment section is bustling with some pretty lively debate. According to Scary Mommy, the city has busted about 20 drivers since July 2016, when the state law first went into effect.

The cops can't pull a driver over for suspicion of smoking around a kid, but if they happen to stop them for another traffic violation, they can be cited, according to the Code of Virginia:

It is unlawful for a person to smoke in a motor vehicle, whether in motion or at rest, when a minor under the age of eight is present in the motor vehicle. A violation of this section is punishable by a civil penalty of $100 to be paid into the state treasury and credited to the Literary Fund.

The law defines "smoking" as using a "lighted pipe, cigar, or cigarette of any kind or any other lighted smoking equipment," so it's a little unclear whether vaping counts, but better safe than sorry, I'd say.

In addition to the risk of lung cancer and other associated diseases, the American Cancer Society warns that exposure to secondhand smoke may also increase children's risk of lymphoma, leukemia, liver cancer, and brain tumors. In addition, according to the ACS, studies have shown that kids whose parents smoke around them have more ear infections than their peers, and more lung infections, such as bronchitis and pneumonia. They're also more likely to get sick, cough, wheeze, and have shortness of breath.

Some Twitter users think those are some pretty compelling reasons to keep the cigarettes away from little ones. "I definitely could have benefited from a ticket when I smoked around my child years back," admitted one regretful parent. "They should be charged with child abuse," said another, which is... bold. However, the majority of the responses were anything but positive. While most agreed that smoking around kids wasn't exactly the healthiest choice, quite a few took exception to the idea of the cops telling them what's best for their children.

The term "Nanny state" got thrown around, and, as Twitter is the finest example of Godwin's Law that has ever existed, one person inevitably compared the traffic citation to the Holocaust.

This law & the ability of strangers (regardless if they are police) to place people under such scutiny far exceeds the Nazis keeping track of Jews in a Polish ghetto in 1942. No justification to go this far - regardless what they smoke.

Can we all agree that a $100 fine is not the same thing as genocide, maybe? Hyperbole is all fine and good, but when you belittle the mass extermination of human beings, I think you've gone a bit too far, to put it mildly.

One response questioned if the police would eventually "start ticketing people for smoking in their own home," and another escalated things even further:

Are police going to sit at fast food restaurants and issue tickets to parents of over weight children who feed them fast food? What about parents who let their children play sports known to cause possible brain injuries? Just wondering where all this can lead.

But this isn't that, you guys. Smoking around your kid in a confined space like a car is inherently more dangerous than smoking in your home or outdoors, according to the ACS: "if someone smokes [in a car], the toxins can build up quickly – even when the windows are open or the air-conditioner is on. Again, this can be especially harmful to children." This isn't really that big of an infringement on parents' rights, to be honest. They're still free to smoke when their kids aren't around, because they're adults, and they can make that choice for themselves. But kids can't choose whether they want to inhale smoke in a stuffy car, and really, they shouldn't have to.