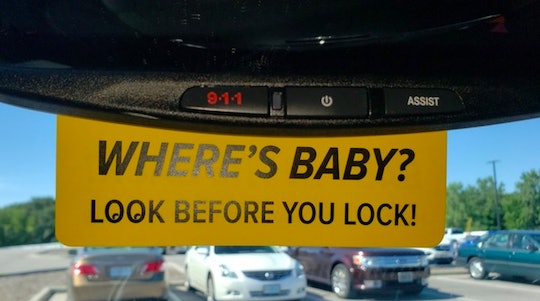 As summer temperatures start to sore, a Missouri police department is offering parents free rearview mirror reminders in an effort to help prevent hot car deaths. A startling and tragic number of children die as a result of being left or stuck in hot cars every year and the O'Fallon Police Department (OPD) outside of St. Louis has taken a simple step to support its community's parents and caretakers in order to help prevent further tragedies from happening.

In a post shared on Facebook on June 25, the OPD wrote, "In the continuing effort to provide the best level of service possible to our residents, the OPD is offering these rearview mirror reminders to ensure your most prized possession is safe."

The free hangers are bright yellow with black print, and the message on them reads: "Never leave a child alone in a vehicle, not even for a minute! BABY IN THE BACK! Heat related deaths are preventable." The other side of it reads: "Where's Baby? Look before you lock!"

"So far this year 13 children have died in the US after being left in hot cars, including one in St. Louis County earlier this month," the OPD wrote on Facebook. According to People, the police department started the thoughtful and proactive initiative three weeks after an 11-month-old girl died after being left alone in a hot car.

Most comments on the Facebook post have been positive and praised the police department for going above and beyond to keep their community's littlest citizens safe.

"Excellent idea! Parenting is tough enough with all the unwelcome 'advice' from others such as in this comments section," one such commenter wrote. "OPD definitely goes above and beyond to serve and protect!" Another wrote, "I love how you guys are rolling out these and other small notables to think outside of the box to keep us safe! You guys are awesome!"

While some commented that it's "sad" the police department felt the need to offer a reminder like this in the first place, unfortunately, accidents do happen and the figures are quite jarring. In fact, according to a study published by the National Security Council, as ABC News reported, about 37 children die each year from being left in hot cars. And since 2007, the National Safety Council found there have been 408 deaths.

Awareness about the dangers of kids being left in hot cars is crucial as children are more susceptible to heat than adults, according to Kids and Cars. The Children's Hospital of Wisconsin explains that children are "especially vulnerable" to heat-related illnesses because they don't sweat as much as adults nor do they adjust to the heat as quickly as adults can. And temperatures in cars can reach dangerous highs very quickly. For example, according to Kids and Cars, it would take just 10 minutes for a car to reach 105 degrees on an 86-degree day.

Despite advances in technology and legislation aimed at safety, the rate of children dying in hot cars has actually risen over the years. According to Parents, only 12 children died in hot cars annually before the late 1990s. In 2018, there were 52 hot car deaths, which was the most fatalities recorded in any given year, according to the Washington Post.

Policymakers are working towards a solution to help prevent such tragedies with bills like the Hot Cars Act of 2019, according to The New York Times. The legislation would require all new cars to come with a child safety alert system, an audible warning that would alert the driver if a person was in the back seat after the engine is shut off. Currently, according to The New York Times, the Kia Telluride and Hyundai Santa Fe already come with a system that senses movement in the second and third rows when a car is in park.

Beyond the OPD's initiative and legislation in the works, there are a few things parents and caregivers can also do. Childhelp, a nonprofit organization, recommends leaving a child's toy in the front passenger seat as a visual reminder of the child in the back. You can also put an item of yours, like your phone or wallet, in the backseat with your child, so you're forced to get it (and therefore see the child) when you reach your destination, Childhelp suggests.

Even if it's a pleasantly warm day, cars can heat up quickly to unbearable temperatures and, as current statistics show, preventable and tragic accidents do happen. No parent wants to think about it, of course, but the OPD's free hanger idea is a brilliant and thoughtful way to help prevent such tragedies from happening.