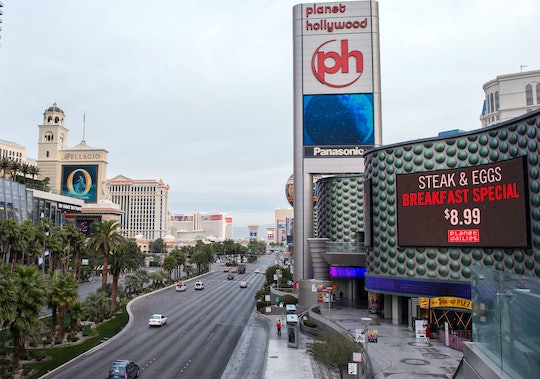 The Las Vegas Metropolitan Police Department has confirmed that 24-year-old Lakeisha N. Holloway was the driver of the 1996 Oldsmobile sedan that plowed into a crowded sidewalk on the Las Vegas Strip, injuring dozens and killing one, according to CNN. Police have classified Holloway's driving rampage as an "intentional" act, which is all the more disturbing because Holloway's 3-year-old daughter was reportedly in the back seat, according to U.S. News & World Report. Her daughter was not injured. Police charged Holloway with murder, and she was being held without bail Monday. Holloway did not immediately respond to Romper's request for comment.

Holloway's motives are currently unknown, but what is known is that Holloway is from Portland, Oregon, and, in 2011, she was convicted of driving uninsured, according to Oregon Live. She is a graduate of the Portland Opportunities Industrialization Center, which is an institution of education for "alienated, at-risk youths." Additionally, Oregon Live reported that Holloway has a history of homelessness, and that she grew up in a low-income household. Oregon Live found information that said Holloway's mother had an eighth-grade education. Sheriff Joe Lombardo of the Las Vegas Police told reporters that the young mom seemed calm when she was arrested and even had the wherewithal to ask a hotel valet to call 911 once she had stopped her car, according to U.S. News & World Report.

Bystanders told CNN that as Holloway pummeled through the crowd, pedestrians attempted to get her to stop driving, and when she did momentarily stop, they tried to punch through the car's windows. "She accelerated again and just kept mowing people down," one witness, Antonio Nassar, told CNN. According to ABC News, the incident left at least 35 injured, and Jessica Valenzuela, 32, died at a nearby hospital. Reportedly, Valenzuela, a resident of Arizona, was on vacation in Las Vegas with her husband.

Additionally, Oregon court records show that Holloway recently petitioned a judge to change her name to Paris Paradise Morton. It remains unclear what prompted Holloway to drive into the crowd of people, but Lombardo told reporters that she may have had a falling out with the father of her child shortly beforehand.