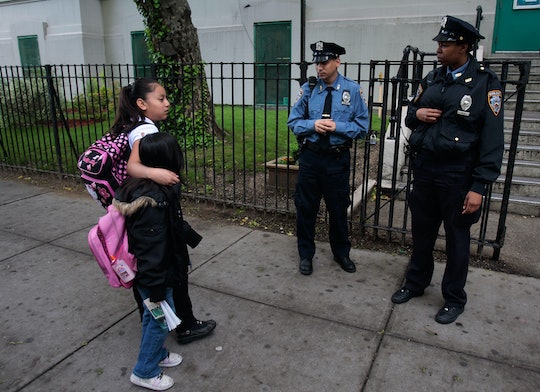 Over the years, more and more police departments across the country have implemented feel-good programs that hope to boost relationships between officers and students. You see it all over the internet — those short videos of cops and kids dancing together or doing the latest social media challenge. Police in Northampton, Massachusetts, attempted the same when they instituted a free program in which uniformed officers would give elementary school students high fives before class on Friday mornings. But recently, Northampton police stopped the “High Five” program after parents said they were concerned for their children.

According to The Boston Globe, the Northampton Police Department put its High Five Friday program on hold this weekend after meeting with a group of parents who felt their children "might respond negatively to a group of uniformed officers at their school." Particularly, parents were concerned for children of color and undocumented students, who are disproportionately targeted by police and may be triggered by seeing police before class, the paper reported. The program, which began in December, was inspired by a presentation given by the International Association of Chiefs of Police last fall.

The Northampton Police Department released a statement on its Facebook page Saturday evening addressing its temporary discontinuation of the High Five program. The post, in part, read:

NPD really enjoyed greeting kids as they arrived at school. But, as much as we enjoyed the visits, we also took time to listen to the thoughts of some school committee members, school staff, and past and present parents/families. For a large portion of our population this program may not seem controversial. However, we cannot overlook the fact that this program may be received differently by some members of our community. Most importantly, we want kids to arrive at school enthusiastic and ready to learn!

NPD's Facebook post received nearly 400 comments as of Wednesday morning, with most people expressing outrage over the department's decision to discontinue the program. It didn't take long for the comments section to devolve into a one-sided, anti-immigrant shouting match that ignored — if not outright dismissed — the reality of police violence that disproportionately affects people of color. Facebook commenters instead blamed High Five Friday's suspension on a "handful" of concerned parents and "liberal snowflakes" for "fostering the hate and fear" of police. Unsurprisingly, similar accusations popped up on fringe conservative blogs covering the news.

The response to NPD's statement illustrates exactly why High Five Friday and similar initiatives are problematic. On the surface, feel-good programs that aim to improve student-police interactions seem positive and progressive. But those actions don't actually address why there is tension between youth and law enforcement in the first place, nor the decades of racial bias among police. Parents and students who are happy to see police first thing before class do not have to worry about their safety or being targets of discrimination. Black children, on the other hand, are far more likely to be arrested in schools that have police officers monitoring the halls, even though they represent less than 20 percent of the student population, according to Education Week Research Center. Immigrant children and their families, regardless of their status, are often targets of bullying and police harassment — a reality recently exposed in Sunset Park, Brooklyn — and given the recent wave of deportations targeting undocumented, non-criminal immigrants, it's no wonder families might be concerned.

It's easy to fall for these feel-good initiatives. In a country where police have already killed more than 100 individuals in less than two months, as tracked by killedbypolice.net, it's only natural for some people to want to challenge the prevailing narrative. But a line of cops giving high-fives to 10 years old on Friday morning won't actually achieve that goal. Training reform, holding officers accountable, prosecuting police brutality, firing bad cops, and enforcing department policy are much more meaningful ways to build trust in law enforcement.