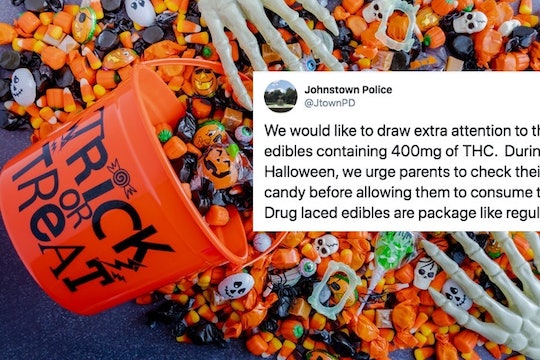 Ahead of Halloween this year, police are warning parents about THC-laced edibles that resemble brightly-colored candy packaging that were recovered in a recent drug bust. However, before parents panic and throw out their kids' Halloween candy, there are a few reasons why you should, of course, be aware but not alarmed.

In a Facebook post shared on Thursday, Oct. 10, the Johnstown Police Department in Pennsylvania urged parents to be "ever vigilant" when checking their children's candy stash after Halloween, specifically the "Nerds Rope edibles" that contain 400 mg of THC, which officers found during a recent search warrant in Stonycreek Township.

"During this Halloween, we urge parents to be ever vigilant in checking their children’s candy before allowing them to consume those treats," Johnstown Police Department wrote on Facebook, alongside three photos of the packaged edibles. "Drug laced edibles are [packaged] like regular candy and may be hard to distinguish from the real candy."

The candy's pink and yellow packaging does have a clear warning label that states, "For medical use only: Keep out of reach of children and animals." The packaging also says in bold yellow text that the candy is made with a "super potent formula" and contains "400 mg THC per rope." THC is the main chemical found in marijuana and "stimulates cells in the brain to release dopamine, creating euphoria," according to Live Science.

Although the packaging is brightly colored, the clear warning label in addition to the expensive price tag likely attached to the Nerds Rope edibles may help curb parents' fears and concerns that THC-laced candies could possibly end up in their child's Halloween candy stash. For example, while the cost of edibles varies, The Daily Dot has reported that they can cost anywhere between $5 to $50 "depending on their strength and ingredients."

The National Organization for the Reform of Marijuana Laws (NORMAL) touched on this in a 2011 blog post about fears surrounding marijuana-laced Halloween candy. "If you are a person who uses THC-laden treats for medical or recreational purposes, why are you handing out a $20 'Buddafinger' when you could pass out a 20-cent 'Butterfinger'?" the nonprofit wrote.

Additionally, parents should also take comfort in knowing that there was "absolutely no evidence" that would lead law enforcement to believe that the Nerds Rope edibles they recovered were meant for trick-or-treaters, according to a statement provided to Rolling Stone. "In Pennsylvania, marijuana is still illegal. We don’t have edibles. There is no education," Captain Chad Miller of the Johnstown Police Department told Rolling Stone about the department's warning. "We just want to make sure everyone is aware this is out there."

This is not the first time law enforcement and health officials have issued such a warning. In 2017, for example, the New Jersey Department of Health warned that there was "a significant presence of marijuana candy and other edible forms in New Jersey and nearby states." While urging parents to check their children's Halloween thoroughly, health officials also said, "The presence of these edible forms of marijuana poses a great risk to users, especially to children, who may [accidentally] receive marijuana candy during Halloween."

Of course, if edibles were to end up in a child's Halloween candy stash, that would be cause for concern. Because children are much smaller than adults, according to the Children's Hospital Colorado, if they were to consume edible products, which have "very high amounts of marijuana," they could suffer a severe reaction or symptoms that may require them to stay at the hospital.

It appears the main concern is that THC-laced candy may accidentally end up in a trick-or-treater's Halloween bag, or be mistaken for traditional sweet treats. As law enforcement in Pennsylvania advised, being aware and vigilant is key. In fact, according to California State University Channel Islands, Halloween candy "tampering is rare," but it's important that parents "closely examine all treats."

So on Oct. 31, do as you normally would do when your costumed kids come home with their buckets full of candy: thoroughly examine it and when in doubt, throw it out.