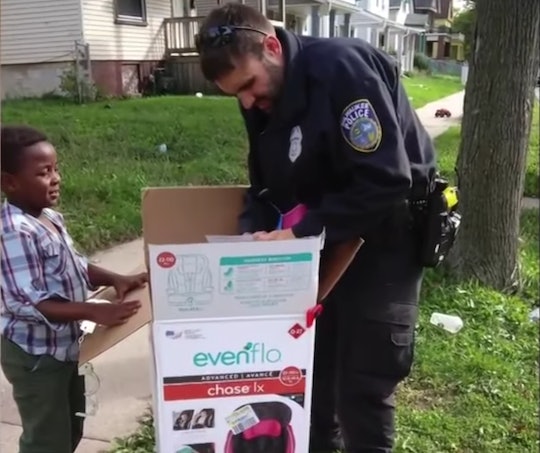 Instead Of Writing A Ticket, This Police Officer Bought New Car Seats For A Mom

What began as a routine traffic stop quickly turned into an act of kindness when a Milwaukee police officer bought car seats for a mom instead of ticketing her. According to the Milwaukee Police Department, officer Kevin Zimmermann gifted two brand new car seats to a mother he had pulled over after finding out she'd been unable to afford them and was driving around with young children.

"Andrella Jackson was recently pulled over by MPD District 5 Officer Zimmerman, and received much more than a traffic citation," the Milwaukee Police Department wrote in a recent post on the department's official Facebook page. "The officer observed that the children in the car were not properly restrained and took it upon himself to purchase two car seats for her."

In an interview with WITI, a Fox affiliated station in Milwaukee, Zimmermann said he'd initially pulled Jackson over because of a problem with her car registration. When he approached the vehicle, however, Zimmermann found a potentially more dangerous problem. "There was three kids in the back, two of them were very young," Zimmermann told WITI. "[I] didn't notice any car seats or any restraints. Clearly, they weren't wearing seat belts because they're jumping around back there waving at me."

Zimmermann's concerns about car seats aren't unfounded. Car accidents are a leading cause of death for children in the United States, according to the Centers for Disease Control and Prevention (CDC). Statistics from the National Highway Traffic Safety Administration show that in 2017, the most recent year for which data is available, three children were killed in traffic accidents every day. But many of these deaths are preventable, according to both the CDC and the National Highway Traffic Safety Administration.

"Child safety seats have been shown to reduce fatal injury by 71 percent for infants (under 1 year old) and by 54 percent for toddlers (1 to 4 years old) in passenger cars," a report by the NHTS noted. Even the use of a seat belt can reduce the risk of death for a child age 5 and older sitting in the front seat of a passenger car by 45%, according to the NHTS. Unfortunately, the NHTS has reported that 35% of children age 12 and younger who died in 2017 in crashes where restraint use was known were not buckled up.

When questioned why she didn't have proper car seats for her children, Zimmermann told local broadcaster WTMJ that Jackson had told him she'd only just recently purchased the car at an auction and couldn't afford them on top of her other bills. "With bills coming up and winter coming up, I have to get coats and boots and shoes for my kids," Jackson confirmed to WTMJ. "So it was hard for me."

A father himself, Zimmermann told WTMJ that he sympathized with Jackson and wanted to help ensure her kids' safety. "I'm a father myself, I have three kids," Zimmermann told the news outlet. "I thought of my kids jumping around. What if a car hit them and they flew and got seriously hurt, if not killed?"

After collecting information regarding the children's weight, Zimmermann purchased two car seats from Walmart and delivered them to Jackson's home, where he installed them in her car. Both Jackson and the Milwaukee Police Department have thanked Zimmermann for his generosity and willingness to go above and beyond the call of duty of his badge. "[Shout out] to Officer Zimmermann at District 5, for my girls Niyah [and] Sky's car seats, reading books, and stickers," Jackson wrote on Facebook earlier this month. "We appreciate it a lot."