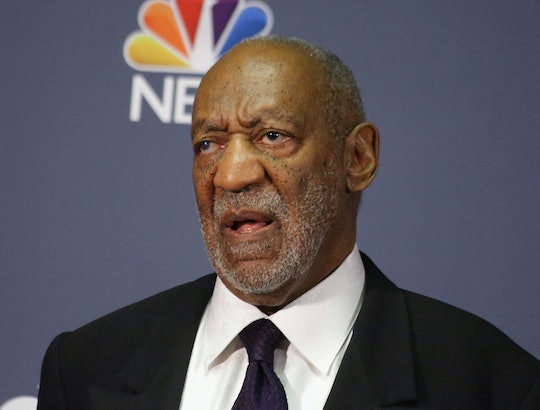 After facing allegations from dozens of women, Bill Cosby is now facing the very real possibility of jail time. An arrest warrant was issued for the 78-year-old comedian Wednesday morning for the alleged 2004 sexual assault of former Temple University employee Andrea Constand. According to Montgomery County District Attorney Risa Vetri Ferman, Cosby has been charged with aggravated indecent assault, a first-degree felony, and was arraigned later Wednesday, according to NPR.

Prosecutor Kevin Steele said “these charges stem from a [2004] sexual assault," which occurred at Cosby's house in Elkins Park, Pennsylvania, which is a Montgomery County township just outside Philadelphia. Steele said Cosby first established a friendship with Constand and then made sexual advances. When she rejected his advances, Cosby urged her to take pills and drink wine, or so the prosecution claims. (Though it should be noted that when this case was originally investigated in 2004, Cosby admitted that he had "obtained the sedative Quaalude with the intent of giving the drug to women with whom he wanted to have sex, and he acknowledged giving it to at least one woman," according to NPR.) Cosby's representative's Christopher Tayback and Monique Pressley did not immediately respond to Romper's request for comment.

While it seems many are happy this whole situation will finally be tried in court, many others — happy or not — are politicizing Cosby’s case for their own personal agenda:

Here’s the thing: Politicizing rape or using it to push personal agendas is shitty — plain and freakin’ simple. Rape should be talked about, and it should be talked about by those with the power to do something. Celebrities can be great advocates for women’s rights. Politicians can be great advocates for the very people they represent. And ordinary people have the power to do extraordinary things. But speaking about it in this context — i.e. using it as a catalyst to discredit a presidential candidate (because, let’s be honest, that’s all these Tweets seek to do) — trivializes the crime and, more importantly, ignores the alleged victim(s) entirely. By not keeping the focus on the alleged crime — or casting it onto Clinton — we are ignoring who this is really about. We are making this not about a woman’s alleged experience — at terrible, terrible one — but about something (and someone) else entirely.

We are actively and effectively encouraging a “rape culture.”

That said, I am in no way implying the sexual harassment charges against former President Bill Clinton were any less severe or less credible than those against Cosby. In fact, I do not know what to think, but I wasn’t in the courtroom when Clinton was tried, I haven’t read up on his case or seen the evidence against him. And the same holds true for Cosby. Do I hold opinions on both accounts? Absolutely. But opinions are not facts. My opinions do not matter right now.

What does matter is this: We should be advocating for women. Rape is the one crime where — when committed — we investigate the victim instead of the alleged perpetrator. We assume the victims are lying. We assume they “asked for it" by wearing something that showed off their legs or chest, or that they had a few too many drinks and that then "no" means "yes." It is the one crime where suspicion immediately falls on the person who reported the rape. And it sucks.

But advocacy is one thing, one good, and imperative, thing. Politicization — which is defined by Merriam-Webster as how we “relate (an idea, issue, etc.) to politics in...[order] to cause (someone) to become involved or interested in government or politics" — is not. Why? Politicizing someone's experience trivializes his or her experience. We take the authority away from victims. And haven’t victims of rape gone through enough? Haven’t victims of rape been victimized enough?

India’s Prime Minister Narendra Modi agrees, saying “India must protect its women...don't politicize rape.” And this is one instance where people in the U.S. should certainly take note.