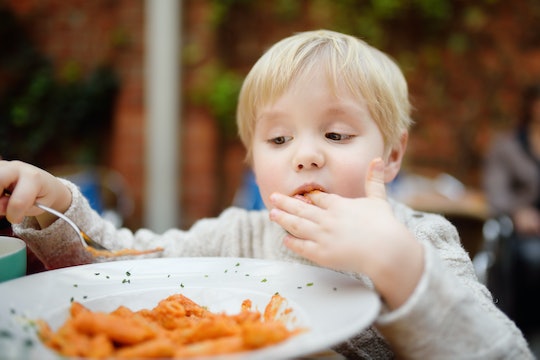 Food poisoning is something that most parents have to tackle at least once or twice. Although it's never fun for anyone involved, a new study found that many parents aren't using strategies to prevent food poisoning when they're not at home and away from their own kitchens. Some people might see getting food poisoning at some point in time as inevitable, especially when eating out at a restaurant, but there are still preventative steps you can take.

A new report from C.S. Mott Children's Hospital National Poll on Children's Health at the University of Michigan noted that few parents are using simple strategies to protect kids from food poisoning outside the home. According to the survey, one in 10 parents said their child has gotten sick from eating spoiled or contaminated food. Restaurants were named as the most common source for a chid's food poisoning outside the home at 68 percent, according to the study. However, only 25 percent of the parents included in the study said that they "check health inspection ratings before dining out," according to News Medical.

The study's findings aren't entirely shocking, since parents do have far less control over a restaurant's kitchen than they do their own. But, that doesn't mean it's all a lost cause. Before going out to eat, News Medical suggests checking a restaurant's food safety rating. Food Safety News has compiled a list of online food inspection records, which makes the process easier for anyone whose location is on the list.

The Centers for Disease Control and Prevention (CDC) estimates that 48 million people get sick from a food borne illness in the United States each year. Most illnesses are infections caused by a variety of bacteria, viruses, and parasites, according to the CDC, but harmful toxins and chemicals can also contaminate food. News Medical explained that, once contaminated food enters the body, some germs release toxins which cause diarrhea, vomiting, and sometimes fever or muscle aches. Knowing that food borne illnesses have potentially life-threatening consequences, it's important to be aware of some preventative steps.

Though there isn't much you can do when you decide to eat out — aside from checking the restaurant's food inspection records — there are some basic food safety tips you can use at home, as outlined by the CDC.

The germs that cause food poisoning can survive in many places. Because of that, they can spread around your kitchen. The CDC recommends washing your hands for 20 seconds with soap and water before, during, and after preparing food and before eating. It's important to wash your utensils and cutting boards between each use, even if they don't appear dirty. The CDC provides more in-depth information around safety specifically within the kitchen.

Or: don't cross contaminate. Anyone who has spent time in restaurant kitchens is well familiar with this rule. When storing raw meat, poultry, and seafood, it's important to keep them away from all other foods in the fridge. It's best to store them on the bottom shelf of the fridge; that way, in case any packaging breaks, there's less chance of other food becoming contaminated.

The University of Illinois also recommends placing meat on plates or in separate containers to thaw. And, in general, follow the rule of "first in, first out" when it comes to meat, poultry, and seafood. That means, whatever is the first in the fridge should be the first used.

For thawing frozen food, the best place to do is is in the refrigerator, in cold water, or in the microwave, according to the CDC, as leaving food to thaw on the counter can cause bacteria to multiple quickly in parts of the food that reach room temperature.

And when it's finally time to get cooking, make sure that all food is cooked to a safe internal temperature. That way, you can be sure it's hot enough to kill any germs that might make you sick. Although some people offer tips and tricks to tell when food is done by checking color or texture, the only way to be sure is using a food thermometer, as noted by the USDA.

Outside of the Clean, Separate, Chill, and Cook, it's good to get children into the habits of washing their hands before and after eating. Think of all the things that kids put their hands on throughout the day and before meals. According to News Medical, a virus like Hepatitis A. is largely passed on through unwashed hands. Getting your children into the habit also means it's something healthy that they can pass onto their friends.

While you can't do much about outside culprits, taking some preventative steps like these and checking the restaurant's health records ahead of time can hopefully prevent some unwanted sickness at home.