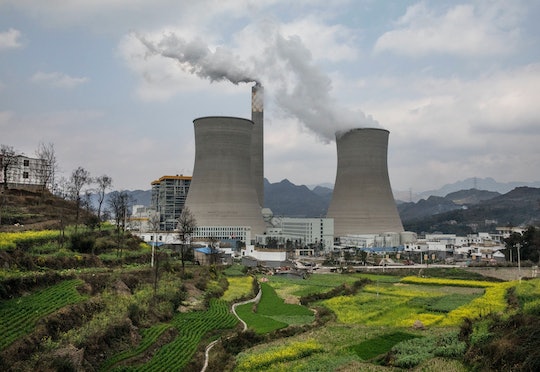 Two new reports produced by the World Health Organization have unearthed a startling statistic about pollution: According to the United Nations' health arm, pollution causes 1.7 million child deaths a year. That means that over one in every four deaths of children under the age of 5 is due to environmental risks, such as air pollution, unsafe water, secondhand smoke, or inadequate hygiene and sanitation. For both environmentalists and parents alike, it's troubling.

"A polluted environment is a deadly one — particularly for young children," WHO Director-General Margaret Chan said in a statement. "Their developing organs and immune systems, and smaller bodies and airways, make them especially vulnerable to dirty air and water."

The first World Health Organization report, Inheriting a Sustainable World: Atlas on Children’s Health and the Environment, found that most diseases that kill children under 5 years old can be prevented with suitable environmental risk interventions. For instance, the risk of contracting diarrhea (which is responsible for over 350,000 child deaths a year), malaria (which causes 200,000 child deaths a year), and pneumonia goes down significantly when families have access to clean water and safe cooking fuel.

A second report, Don't Pollute My Future!, linked child deaths to a number of different environmental challenges: Indoor and outdoor pollution has been linked to the respiratory infections that kill more than 570,000 children a year, and another 200,000 child deaths are due to accidental poisonings, falls, or drowning. 270,000 children die in their first month of life due to issues that could be prevented with access to clean water and sanitary conditions in health facilities.

According to the World Health Organization, pollution is now the greatest environmental risk to children's health, and that's visible in more than just death counts: 11 to 14 percent of children now have symptoms of asthma, a number that's increased worldwide. The unsafe use of pesticides is the largest cause of acute poisoning in children — and unintentional poisonings have caused more than 23,000 deaths a year.

Unfortunately, things are likely to get worse for children. As the World Health Organization wrote in a recent update, "Climate change is one of the greatest new threats to children's environmental health." Higher temperatures have been linked to pollen growth and higher rates of asthma, decreasing fresh water supplies, and altered food crop harvests. More heat waves will also mean increasing rates of heat stress, renal disease, and respiratory illness for children in vulnerable areas.

According to NASA, the world is heating up at a pace that we haven't seen in the past 1,000 years, meaning governments are unlikely to stay within agreed-upon climate change limits as the world warms, according to The Guardian. That means now, more than ever, society needs to take actionable steps to stop climate change and protect children's future — talk to your representatives, support green organizations, and make switches in your own life to cut down on waste. You can also donate to charities that help children affected by environmental risks, by helping them gain access to clean water and sanitation.

For now, numbers appear dire. But there's still time to make incremental changes where the world can — it'll just be one giant team effort.