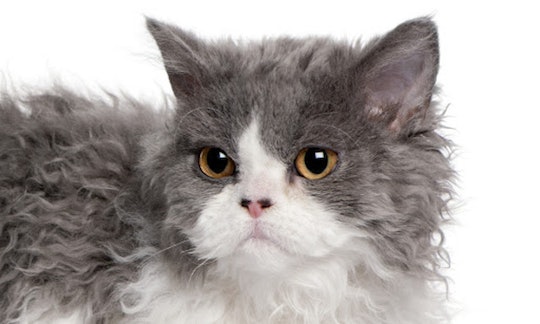 If you've never seen a curly-haired cat that looks it might be half-cat, half-poodle, well, you're missing out. 'Poodle cats' are so exceedingly fluffy that you can't help but get all mushy inside when you see them. They're pretty much as adorable as it gets. So what's the deal with them? When did they appear on the scene?

Well, as Mother Nature Network reported, a feral cat gave birth to five kittens in Montana in 1987, but one had curlier hair than the other four. Breeders apparently didn't recognize this kitten or its thick, curly mane, but a Persian breeder named Jeri Newman adopted the kitten and named her "Miss DePesto" after a television character that had curly hair.

Researchers at the University of Veterinary Medicine, Vienna, concluded in 2012 that this cat is its own distinct breed, the Selkirk Rex, as HuffPost reported. This breed has a gene mutation that makes curly hair the dominant trait, rather than the recessive one that it is in other breeds.

The Dodo noted that the idea that the curly hair might be a dominant trait in these kittens came from Newman, who, after breeding the Miss DePesto with a Persian cat, discovered that three of those kittens had that characteristic curly hair as well.

Though there are other breeds of Rex cats, this one is different, as the aforementioned article from Mother Nature Network reported. Selkirk Rex cats aren't "prone to balding," like Devon Rex or Cornish Rex cats can be, plus it has thicker fur than a breed like LaPerm. It's not unusual for Selkirk Rex cats to be cross-bred, like Newman initially did with Miss DePesto.

As Refinery29 reported, even the whiskers on a Selkirk Rex cat can be curly, which is maybe the most adorable detail about them. The Cat Fanciers' Association also noted that Selkirk Rex whiskers can be brittle and might be prone to breakage. Plus, if the cat has curly hair and whiskers when they're born, they'll stay that way over the course of their life. These cats are definitely cute enough to win over even the staunchest dog-lover, but they probably aren't great for those who are allergic to cats that tend to shed. The previously-mentioned Mother Nature Network article noted that since their coats tend to be so thick, they can shed a lot, which can make allergy sufferers unable to tolerate them well.

There are other cute AF hybrids in the animal world, as well. Pomskies (Pomeranians cross-bred with Siberian Huskies), pizzly bears (polar bears bred with grizzly bears), which are also sometimes referred to as "grolar bears," and, of course, labradoodles, which are Labrador Retrievers cross-bred with poodles, are all sure to make you squeal from happiness. Labradoodles, like Selkirk Rex cats and kittens, also have that characteristic curly hair, thanks to their poodle ancestry.

These cats are cute enough that famous cat lady Taylor Swift, who has two cats, Olivia Benson and Meredith Grey just might want to add another, super-adorable cat to her brood. It's basically a cat-shaped teddy bear come to life, so who wouldn't want to cuddle up with that? Swift's cats are named after Law and Order: SVU character Olivia Benson and Grey's Anatomy character Dr. Meredith Grey. The singer posts photos of the cats on social media and, as People Pets reported, Swift isn't the only one getting ready for her upcoming stadium tour — her furry friends are as well.

If you want to get a Selkirk Rex cat for yourself, you can find breeders online, though checking shelters and adopting an animal that doesn't have a loving home is always a good idea too. These cats come in both long and short-haired varieties, so if you're going to try a breeder, you'll need to know more about what kind of cat you'd like to make a part of your family.

And if a cat isn't in your future, at least you can look through picture after picture of these sweet fluffy things on the internet.