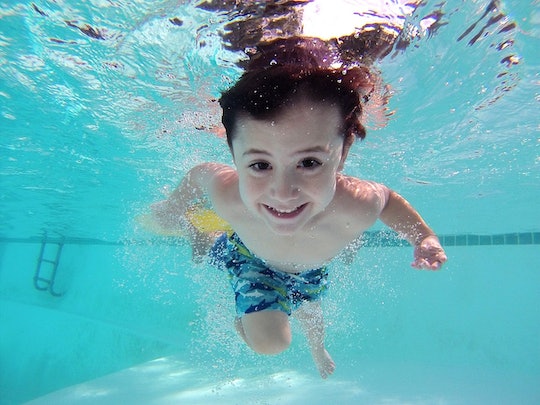 Pools Are Extra Gross This Year, & Here’s What That Means For Parents

Admit it, just about every time you take your kids to the pool, you think about it at least once" "How many kids have peed in this water today? Or worse? Oh look, there's a used Band-Aid floating by." Welp, the Centers for Disease Control just released new numbers that confirm every mother's sneaking suspicion, that public pool you're swimming in is full of germs. And poop. Poop and germs.

The CDC just released its numbers from 2013, which found that 80 percent of the public pools tested in routine inspections across five states including Arizona, California, Florida, New York, and Texas needed to be shut down for poor water quality. That's right, 8 out of 10 pools tested had levels of harmful bacteria high enough to make people sick. Ick.

And apparently those numbers haven't improved much since 2013. TODAY Show correspondent Jeff Rossen went around to a few public pools and water parks to collect and test water samples and only found one that was suitably clean and one additional public pool that didn't have any germs present but tested incredibly high for chlorine, which can irritate kids' skin, eyes, and breathing. That's not super encouraging for families looking for a spot to cool off and play around this summer.

So what's in the water? Just what you'd think. Pee, poop, sweat, and blood are all bodily fluids that can cause waterborne illness. Just a few of the harmful bacteria you can find in your local public pools and water parks include enterococci, which is really just a fancy term for poop. Other harmful germs the TODAY Show found at the pools and water parks it tested included total coliform, more enterococci, E. coli, and pseudomonas, all of which can make people very sick.

So what can parents do? It's not likely kids will easily accept mom's initial reaction of swearing off public pools and water parks forever. But there are a couple of things parents can do to find out the quality of the water they're swimming in and help keep the grossest stuff out of the water.

First, invest in a set of bacteria testing strips and test the water before you get in. This kit on Amazon includes 10 tests for just over $20 and detects E.coli, pseudomonas, and other bacteria. Parents can test the water and let the folks running the pool know what's in it (if they really want to take it into their own hands).

Second, look for pools that enforce an hourly swim break for kids. Forcing kids out of the pool for 10 minutes or so is part of a set of best practice recommendations for pool and aquatic facility operators that allows them plenty of time to use the bathroom, instead of having an accident in the water. That's also a good time for the water to be tested, so parents should keep an eye out to make sure the lifeguard is checking.

Pools that enforce rules like showering before jumping in are also likely to be cleaner than those that don't.

It's important for parents to get educated about what's lurking in their local pool's water and to stay vigilant to protect their family's health. But poolside is also where families make summer memories that will last a lifetime. So instead of skipping the pool altogether this summer, parents should just test the water themselves before they get in, and also try not to think too much about what's in there.

That Band-Aid's gotta go, though.