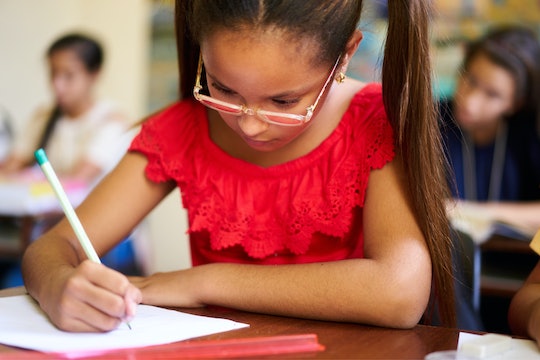 A large body of research has already shown nutrition has a considerable impact on a student's academic performance. The more limited access a child has to food, the more likely their work in school will suffer. But, new research shows that food quality doesn't only affect how well a kid does in the classroom: Scientists have found that poor nutrition and education are bringing down IQ scores, and it's a downtrend that has been happening for decades.

A new study published this week in the journal, Proceedings Of The National Academy Sciences, discovered that a combination of environmental factors have impacted fluctuations in IQ — or intelligent quotient — scores, which have been falling steadily for more than 40 years, according to USA Today. For the study, researchers with Oslo's Ragnar Frisch Center For Economic Research analyzed the IQ results of men born from 1962 to 1991 who ended Norway's military draft, and found a seven-point dip in test scores per generation starting in the mid-1970s, USA Today reported.

Specifically, Norwegian researchers discovered that, between 1962 to 1975, boys gained almost 0.3 IQ points per year, Newsweek reported. But they then noticed a steady decline in scores starting in kids born after 1975, the study's findings show, according to Newsweek.

The researchers behind the PNAS study, Bernt Bratsberg and Ole Rogeberg, attributed the decline in IQ test scores to unfavorable changes to education equality and overall poor nutrition, as well as an increased exposure to video games and other media, according to Newsweek. The Norwegian scientists argued that, because they couldn't find even patterns among the families studied, they did consider genetics or familial factors, such as family size or a parent's education level, to have played a significant of a role in the decline in IQ scores, Newsweek reported.

The trends that we did find within the families are essentially the ones that we see across the population.

But, although the researchers are not ruling out genetics as a factor, "They are not driving the large scale trends that we're seeing," Rogeberg added, according to USA Today.

The PNAS study isn't particularly shocking, though. The Brookings Institute found that poor nutrition has negative impacts on a child's physical development, cognition, and behavior. That, in turn, causes them to fall behind in school. Add on to that a failing education system that fuels academic disengagement and doesn't empower student learning, and it's no surprising IQ scores have been on the decline.

And that's a shame, because having a higher IQ does have its benefits. Namely, you have a longer lifespan. One Swedish study found that people with higher than average IQs tend to live longer and be healthier, according to Vox. More so, researchers have linked higher IQs with career success, Vox reported, meaning that people considered to be smarter are more likely to have better jobs and receive better pay. (But this doesn't mean that they're happier. Research shows popularity and money aren't top predictors of happiness, according to Business Insider.)

Most people, though, have an average IQ score, which is set at around 100, according to Vox. More than 68 percent of people are considered to have average IQs, while more than 14 percent either score below or above average, Vox reported. Less than 3 percent of people have an IQ of 130 or greater.

Does the PNAS study mean, then, that children should be pushed into that 3 percent crowd? No. Instead, what the research reinforces is that more of an investment needs to be made by the U.S. government in both the quality of education and food made accessible to students so they don't continue to fall behind.