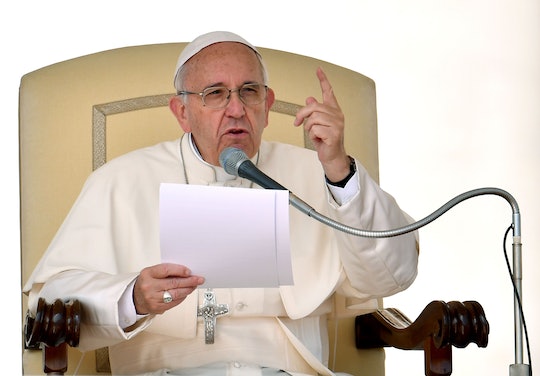 Pope Francis Encourages Acceptance Of All Families, & It's An Important First Step

Since becoming pope three years ago, Pope Francis hasn’t shied away from having the types of discussions that are often considered controversial among followers of the largely-conservative and traditionalist Roman Catholic church. The latest of those discussions? How the Church should look upon “non-traditional” families that fall outside of what has historically been the only acceptable model (aka, two straight, married people). In a 260-page paper entitled “On Love in the Family,” Pope Francis encouraged acceptance of all families, including gay and lesbian families and divorced Catholics, according to CNN. While he stopped short of actually advocating any doctrinal change (he is the pope, after all, and progressive is a relative term), he did urge Catholics to look past “black and white thinking,” favoring compassion and tolerance instead. And he encouraged the world’s 1.2 billion Roman Catholics to consider that,

There is no stereotype of the ideal family, but rather a challenging mosaic made up of many different realities, with all their joys, hopes and problems. Every person, regardless of sexual orientation, ought to be respected in his or her dignity and treated with consideration.

That sounds like a pretty big deal to me.

Of course, Pope Francis has alluded to these beliefs before — he notably said, according to the BBC, "If a person is gay and seeks God and has good will, who am I to judge?" But the latest document is particularly significant because it is considered an apostolic exhortation, according to CNN (or, in other words, an official statement which is meant to tell Catholics how they should live). And it certainly was no rush job: the lengthy statement came after two years of consultation with members of the Church, including two separate gatherings of bishops in Rome to debate the issues discussed in the document, according to the Guardian.

But, while the exhortation is mostly considered to be a positive step forward, many LGBTQ advocates would probably find a number of pitfalls. Firstly, Pope Francis was clear to reiterate that the Church does not recognize gay unions to be the same as straight marriage, according to the Guardian. Pope Francis wrote,

In order to avoid all misunderstanding, I would point out that in no way must the Church desist from proposing the full idea of marriage...De facto or same-sex unions, for example, may not simply be equated with marriage.

He also predictably spoke out against contraception and sex education:

Such expressions convey a negative attitude towards the natural procreative finality of sexuality, as if an eventual child were an enemy to be protected against.

No alleged right to one’s own body can justify a decision to terminate that life.

But one aspect of the Church’s beliefs he did seek to reform? The treatment of divorced Catholics. On the recognition of remarried Catholics, Pope Francis wrote, according to CNN, “the divorced who have entered a new union should be made to feel part of the Church,” and, according to the Guardian, “should not be pigeonholed or fit into overly rigid classifications leaving no room for a suitable personal and pastoral discernment.”

While Pope Francis didn’t call for any specific changes, he did put forth the idea that bishops should be encouraged to interpret doctrine in a broader way to address the issues specific to their local cultures in a way that is less rigid than in the past, according to the BBC:

I understand those who prefer a more rigorous pastoral care which leaves no room for confusion. But I sincerely believe that Jesus wants a Church attentive to the goodness which the Holy Spirit sows in the midst of human weakness.

As an LGBTQ ally, I would have liked to see Pope Francis be a little more direct in his recommendations regarding “non-traditional” families, and to acknowledge the rights of LGBTQ people as being just as valid and important as anyone else's. But, given the difficulty that so many non-heterosexual or cis-gendered people face in countries where Roman Catholic doctrine influences political beliefs and law (looking at you, Brazil!), Pope Francis’ comments will hopefully allow for more open-minded, inclusive discussions where previously there was just straight up discrimination. And even though that might not be revolutionary, it’s still a sign of progress — and that’s really good news.