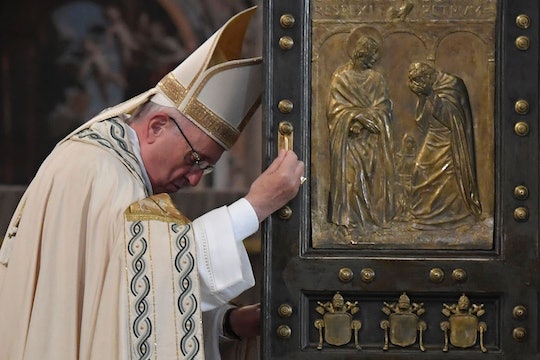 Pope Francis Says The Church Will Forgive Abortion, But His Words Only Perpetuate Stigma

Pope Francis released an apostollic letter Monday giving Catholic priests the authority to forgive abortion. He's decided to continue a special dispensation set up over the past year in honor of the Year of Mercy, which temporarily allowed priests across the world to forgive the "moral evil" of abortion. But this declaration will make that change permanent. The Pope said the Church will forgive abortion, but his words still perpetuate a horrible stigma: that terminating a pregnancy is a moral failing, rather than a personal, family planning decision between a woman and her doctor.

"I wish to restate as firmly as I can that abortion is a grave sin, since it puts an end to an innocent life," the Pope's letter reads, according to CNN. "In the same way, however, I can and must state that there is no sin that God's mercy cannot reach and wipe away when it finds a repentant heart seeking to be reconciled with the Father."

According to Catholic doctrine, the penalty for seeking an abortion is excommunication, according to the Catholic News Service.

The letter won't mean any change in the U.S.; American bishops already had the authority to forgive abortion. But it's the affirmation of the church's view of abortion as a grave sin that continues to fuel Catholic anti-abortion groups and their efforts to outlaw abortion outright, CNN added.

Abortion is considered to be such a serious infraction by the Catholic Church that, according to the Chicago Tribune, the act of granting forgiveness would often go to the bishop or another priest who has a sort of expertise in forgiving women their abortions.

The Pope's new directive, besides casting a woman who seeks Constitutionally protected health care as a moral failure, also supposes there are legions of women who are so tortured by the thought of their abortions that they need to seek the Church's forgiveness. The facts just don't seem to line up with that, though.

A scientific study conducted by the academic journal PLOS ONE and reported on by TIME magazine found that women overwhelmingly don't regret their abortions. In fact, the study, conducted by the Bixby Center for Global Reproductive Health at U.S. San Francisco's School of Medicine, found a staggering 95 percent of women surveyed didn't regret their decision to terminate a pregnancy. Sure, women experienced a range of emotions after seeking out an abortion, but according to TIME, those who are anti-abortion tend to confuse general emotions in the wake of ending a pregnancy with regret for having the abortion. But the two are vastly different. The study found, according to TIME:

Certainly, experiencing feelings of guilt or regret in the short-term after an abortion is not a mental health problem; in fact, such emotions are a normal part of making a life decision that many women in this study found to be difficult. Our results of declining emotional intensity… [find] steady or improving levels of self-esteem, life satisfaction, stress, social support, stress, substance use, and symptoms of depression and anxiety over time post-abortion.

If women aren't having widespread feelings of regret, why would they confess their abortion to a priest? It's nice to see the Church moving, even if slightly, toward a more moderate outlook on abortion. But telling women they are sinners and moral failures probably isn't the best way to get women to come forward.

Want to know the No. 1 reason, according to TIME, that women gave for terminating a pregnancy in the UC San Francisco study? Money. It would seem putting the Church's considerable financial resources behind access to contraception and family planning would be a far more effective way to curb abortion than shaming them and threatening their souls with eternal damnation.