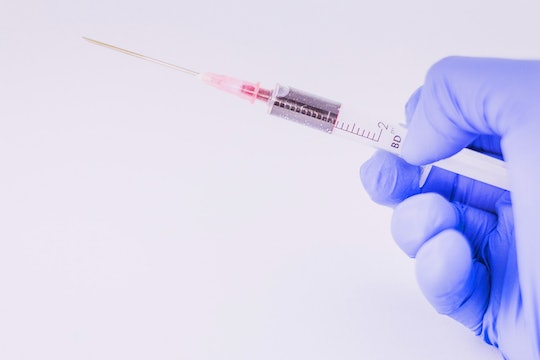 Popular Ovarian Cancer Screening May Not Work, FDA Says, & There Are No Other Options

Ovarian cancer is the fifth-leading cause of cancer deaths among women, according to the National Cancer Institute. Although early detection is one of the best defenses against the cancer, many women are not diagnosed before the disease becomes advanced, and some are even misdiagnosed, according to Cancer.org. Now, the FDA warns that a widely used ovarian cancer screening test might not work.

90 percent of women who have ovarian cancer that was diagnosed in the early stages will live longer than five years after diagnosis, according to The National Cancer Coalition. The challenge is getting that diagnosis. Reproductive cancers, like ovarian or uterine cancer, can be notoriously hard to diagnose because their symptoms are vague and many women have no symptoms at all until the cancer is advanced. When a doctor suspects that a woman might have cancer of any kind, one of the first things they usually do is order a blood test called a cancer antigen 125, or, CA125.

CA125 is a protein in the blood. Researchers have noticed an association between people with cancer and higher levels of CA125, according to The Foundation for Women's Cancer. The levels of CA125 in the blood of someone who is being treated for cancer are often monitored to see if treatments are working: if their levels start out high when they're diagnosed and they receive a treatment like chemotherapy, the hope is that the treatment would make the levels go down.

As it turns out, there are actually many inflammatory conditions that can cause elevated CA125 levels that aren't cancer, according to The Mayo Clinic. Fairly common, nonmalignant conditions like endometriosis, pelvic inflammatory disease, fibroids, and even menstruation can increase CA125. If a woman's CA125 is tested when she's on her period, for example, her CA125 level could have increased two- to three-fold due to hormone shifts that are a natural part of her cycle.

The FDA is worried that if CA125 is being touted as a definitive diagnostic test for cancer, it could lead to misdiagnosis. Or at the very least, women could undergo a lot of needless, often invasive tests to rule out a cancer that they may not even be at risk for. But even more unsettling are the cases in which women who ultimately do have ovarian cancer are not diagnosed early — or at all.

The FDA said in its statement:

The Agency is especially concerned about delaying effective preventive treatments for women who show no symptoms, but who are still at increased risk for developing ovarian cancer.

The FDA goes on to say that, despite how common the CA125 test is, it's not definitive and, in fact, there is no definitive test for ovarian cancer at this time. They warn that any company marketing or manufacturing tests (to physicians or patients) that claim to be diagnostic for ovarian cancer have not been vetted by the FDA and in many cases have been proven to be ineffective.

In light of this recommendation, the FDA urges physicians to continue to use screening tests, like transvaginal ultrasounds, in women who have symptoms that could be indicative of a gynecological condition, and that if they suspect a woman is at-risk for any reproductive cancer, they refer her to a genetic counselor or oncologist who can look for mutations in her genes, such as the BRCA1 gene.

The National Ovarian Cancer Coalition urges women to have their regular gynecological exams, including Pap tests in women 18 and older who are sexually active, and also warns that CA125 — even when ordered by a doctor — is not necessarily definitive either way when diagnosing cancer.