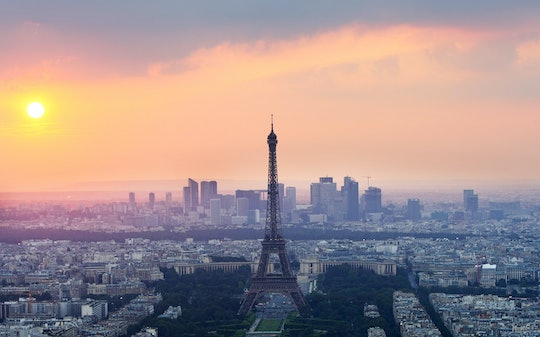 Earlier today, several explosions and shootings took place over seven locations throughout Paris, France. A hostage situation took place at the Bataclan Concert Hall, and more than 80 people were killed while dozens more were wounded. (The total death toll attached to the attacks, which ISIS claimed responsibility for, sits at over 120.) But amidst the heartbreaking violence and the destruction several gunmen wrought throughout the City of Lights, hope rose. The hashtag #PorteOuverte began trending immediately after the events broke out throughout the city. People from all over were posting their addresses and directions to their homes in an effort to get scared, wounded, and confused Parisians off the streets and into safety. The hashtag revealed the very, very best of Paris and its inhabitants, and honestly, the very best of humankind itself.

#PorteOuverte translates to "open door," and shows a willingness in a city seized by fear to open not just their doors, but their hearts, their refrigerators, their pockets, and their arms to strangers. In time when inhumanity is everywhere, humanity reined supreme. If there is one thing we can learn from this, let it be that. If there is one thing we can take, let us take that and hold on it to it tightly. Because while so much remains beyond our control, that is enough.

In tragedy, people have two options: to save themselves, or to save each other, and the #PorteOuverte hashtag beautifully summarizes what choosing to do the latter is like, regardless of your personal safety and with indifference toward your personal space. It's so easy to assume that you'll do what you can to save others in times of sheer chaos, but Parisians are proving that sentiment true — and perhaps most notably, it's not just one particular person or people who are stepping up to be there for their neighbors, friends, and strangers: it is everyone.

No matter their sex, their gender, their race, their religion, their color, their age, their hopes, their dreams, Parisians are banding together to ensure that their fellow city dwellers are safe, sound, and well out of harm's way.

Time and time again, both in domestic situations and international, the sheer breadth of the human heart is awe-inspiring. We put our differences aside and we stand up for each other. We choose to be there for one another. We latch on to love and acceptance when hate and indifference are closer in reach. We believe in beauty and in each other and in hope, and we turn our collective backs on the hatred of those who wish to do harm to us and to our beliefs. For a moment, however brief, however long, we see eye to eye. It doesn't matter which party you belong to or what your socio-economic standing is. No one cares how much money you make or how spacious your living room is. What matters is the size of your heart and your willingness to give. What matters is your ability to do and be and allow. What matters is your hope.

What happened in Paris tonight is unforgivable. The lives lost and the people affected have witnessed unspeakable tragedy. It is all we can do to come together. To lend a hand, a heart, a willing shoulder. Fear can do incredibly scary, dangerous things. Fear can render us thoughtless. Fear can cripple us with fear. But fear cannot stop the force of hope and strength and belief — not in any particular religion or belief system, but in each other. No matter how many bombs will sound or how many explosions will go off; no matter how many people will give their lives and take others in the name of their morals and beliefs, fear is not enough to silence the bold and the brave and the powerful. It sounds so cliche to say, but in times like these it's impossible to say it enough (or to say it as well as you'd like): there is power in numbers, and even greater power in hope.