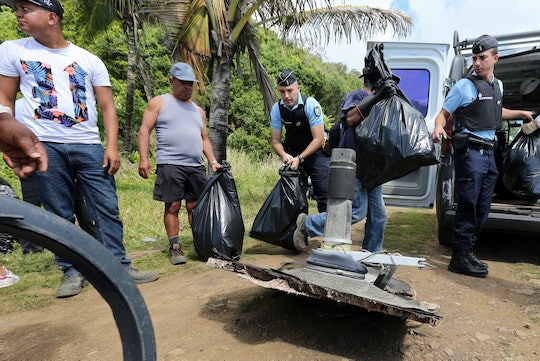 When Malaysia Airlines Flight MH370 disappeared into thin air on March 8, 2014, leaving no trace behind, the world was shocked that such a thing could happen. Almost two years ago, the Boeing 777, which was flying from Kuala Lumpur to Beijing, disappeared en route with some 239 people on board. After extensive searches, results were not promising — until now. On Wednesday, a source close to the investigation reported that possible MH370 airline debris had been found in the waters off of Mozambique in southeastern Africa, nearly two years later after the plane first disappeared.

In the months that followed the plane's initial disappearance in March 2014, few physical evidence was unearthed that could reveal what had happened to MH370. Then, in July 2015, almost a year and a half after the airplane went missing, that changed. According to NBC News, a 6-foot-long barnacle-encrusted wing flap was discovered that month by a cleaning crew on Reunion Island, an island in the Indian Ocean located just off the southern tip of Africa. Investigators determined that it came from the missing flight and the Malaysian Prime Minister confirmed that it did indeed belong to the airplane.

This was major news at the time, considering that there was no trace left of anyone on board or any clue as to why the plane went missing. Finding the debris was the first step in answering a multitude of questions.

Now, with this new piece of debris possibly belonging to MH370 as well, investigators move one step closer to answering more questions.

The Malaysian Minister of Transport took to twitter today to address the rumors of the debris belonging to the missing airplane. "Based on early reports, high possibility debris found in Mozambique belongs to a Boeing 777," tweeted Liow Tiong Lai, before cautioning, "I urged everyone to avoid undue speculation as we are not able to conclude that the debris belongs to MH 370 at this time."

As Lai stated, the piece of debris appears to belong to a Boeing 777 — which is the same airplane model as the fated MH370 — but is not yet confirmed to belong to MH370.

According to CNN, American tourist Blaine Gibson was taking a trip on a boat off the coast of Mozambique when Gibson and the owner of the boat owner found the debris washed ashore. Upon finding the piece of debris, Gibson said it felt "like a dream."

The piece of debris is currently headed to Malaysia where it will undergo further examination. Malaysian Airlines stated on Wednesday that it was "too speculative at this point for MAS to comment."

Whether or not the debris belongs to MH370, it seems like this discovery leaves authorities one step closer to putting together the pieces of something big, and bringing the families of the missing passengers some answers — and, more importanly, some peace.