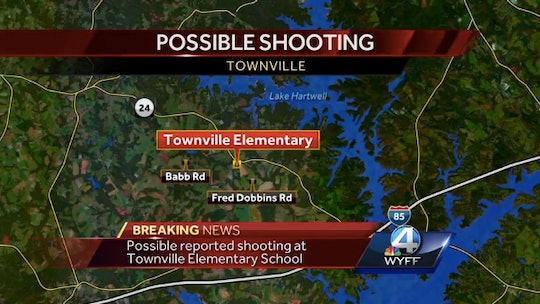 Reports of a shooting at an elementary school in South Carolina, had parents, teachers, and authorities all on high alert Wednesday afternoon, according to Greenville NBC affiliate WYFF4 News. Armed police officers were on the scene at Townville Elementary School at 105 State Road in Townville in Anderson County. Students were evacuated to nearby Oakdale Baptist Church at 6724 Highway 24 in Townville while officers search the school. According to the outlet, a Life Flight helicopter left the scene shortly after alerts went out.

Update: In a press conference on Wednesday, authorities stated that the alleged Townville shooter had personal connections to a deceased individual found on Osborne Road shortly before the shooting. According to Capt. Garland Major of the Anderson County sheriff's office, the man, 47-year-old Jeffrey D. Osborne, was reportedly gunned down by his son, who then allegedly went on a rampage inside the elementary school approximately two miles away. No motive was given for the alleged incident.

The story is still developing, however, CNN is reporting that at least two children and a teacher have been shot. A reporter for Independent Mail on the scene in Anderson County reported via his Twitter account that according to the Chief Deputy 2 students have now been transported to local trauma centers on Life Flights, 1 teacher left in an ambulance, and that a teenage suspect is in custody. An adult male's body was found near the scene is believed to be connected to the shooting, according to NBCNews.

The Los Angeles Times reported that coroner Greg Shore stated the injuries sustained by the two children do not appear to be life threatening. WYFF hosted a livestream of the scene on Facebook where concerned parents were spotted arriving at the school looking for their children. The students were taken by buses to a nearby, temporary safe haven. An unidentified police officer also instructed the parents of the other Townville Elementary School children to pick up their kids from the safety of the Oakdale Baptist Church.

According to Everytown for Gun Safety, the shooting at Townville Elementary School is the 37th school shooting in 2016 alone. This tragedy is far too common in America that it has truly become an epidemic. Vox reports that, according to United Nations data, "no other developed country in the world has anywhere near the same rate of gun violence as America. The United States has nearly six times the gun homicide rate of Canada, more than seven times Sweden's, and nearly 16 times Germany's."

The investigation is still ongoing. More information about the suspect, as well as the motivation behind the shooting is still unknown.