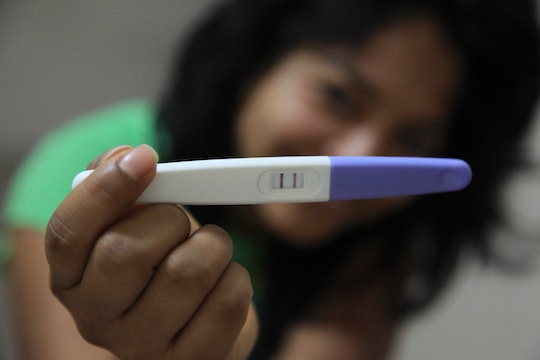 It's that dreaded time of year again: April Fool's Day is just around the corner and the trickiest of the tricksters are already rubbing their hands together with mischievous glee plotting this year's pranks. Every year on social media — Facebook especially — I see fake pregnancy announcements posted as April Fool's Day jokes. And it drives me absolutely batty when I see them. Fake pregnancy announcements aren't funny and, for many people on your friends list, are actually pretty hurtful and painful to see.

Full disclosure: I've never really been a fan of April Fool's Day or this whole "prank" culture on YouTube. I may sound like an old fogey, but I just don't find any of it funny, cool, or frankly, necessary at all. But April 1 isn't disappearing from calendars anytime soon, so the annoying legacy of April Fool's Day lives on. I personally don't celebrate beyond checking out the latest April Fool's Day Google gag.

I totally understand the excitement of sharing a pregnancy announcement on social media: Announcing my own pregnancy was its own event in the blogosphere four years ago. Between the ubiquity of Facebook and its proprietary algorithm sending top-commented content straight to the top of our News Feeds, some see the fake pregnancy announcement April Fool's Day prank as a viral opportunity not to be missed, but let me lay it out for you: It's a terrible, sh*tty idea. Don't do it — and here's why.

First, some backstory: I was diagnosed with premature ovarian failure in 2009. At 26 years old, I had already been through menopause (FYI: It sucks.). I found out that having children of my own just wasn't going to happen for me — a little over a year into my newlywed marriage and well before we had even planned to start trying to have children. My husband and I were devastated. My infertility took me to some pretty dark places those first six months after my diagnosis.

At the time, Facebook was still a relatively young social media platform, but its pervasiveness was certainly on the rise. This is what it felt like every time I saw another pregnancy announcement on Facebook:

Ditto this same reaction for every birth announcement, ultrasound photo, and "baby's first XYZ" post. Every time I saw these social media posts celebrating an otherwise joyous moment in another person's life, it was a sucker punch to my barren gut, a stinging reminder of something I couldn't have — couldn't achieve on my own — of a biological failure beyond my control. These posts initiated run-on internal monologues of conflicted and ugly thoughts: "I should be happy for them, but I'm so jealous, and oh my God I'm a horrible person for not being immediately happy WTF is wrong with me."

Lather, rinse, and repeat for every such pregnancy and baby-related post I saw on social media for the next three years. Imagine what it's like to live with infertility — of what it must feel like just trying to get by each day at a time when it seems like everyone can get pregnant but you. Now imagine how it must feel when you find out that pregnancy announcement from your BFF was just a joke.

Imagine what that must feel like after you've just miscarried the pregnancy you just announced the month before, when you thought you were in the safe zone of finally telling people. Or after that miscarriage before you even had a chance to tell your parents — or your partner. Or after that birthparent match that just fell through. Or after your third IVF cycle failed and there's no more money left in the baby making fund. Or after the surrogate backed out.

Despite how public our lives have become on the endless scroll of social media feeds, that doesn't mean you're seeing the whole picture. Even when one in eight couples experience infertility in the U.S., it's still a silenced disease. Even with a pantheon of celebrities sharing their infertility stories, infertility is still a taboo topic. And let's be honest: Admitting that things just aren't working the way they're supposed to in the bedroom isn't something most people want to post to Facebook, anyway.