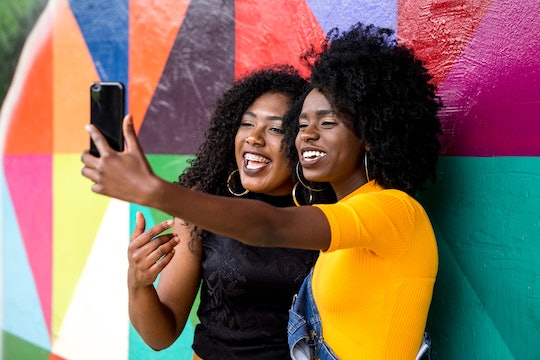 Posting Tons Of Selfies May Be Linked To Increased Narcissism, New Study Says

It is the age of social media and that comes with plenty of selfies. You've probably heard the usual criticisms before — that taking selfies is obnoxious and, well, a little self-centered. Personal opinions about selfies aside, is there any possible link between them and something bigger? According to a new study, posting tons of selfies may be linked to increased narcissism. But, that doesn't mean you need to stop snapping away.

Selfies have been the subject of both praise and criticism. On one hand, a 2016 study found that selfies can boost your mood and relieve stress. Theorists have also argued that selfies are a new form of communication, as reported by the New York Times. It's not like the human desire to see yourself is completely new, after all, considering painted portraits exist. What's new is the technology behind selfies and just how easy they are to make.

However, selfies can lead to some issues. Popular apps that people use, like Instagram and Snapchat, have filters that people love. Recently, doctors began investigating "Snapchat dysmorphia", a form of body dysmorphic disorder. Essentially, it's when people want to look the way filters do.

Now, researchers are looking into a possible link between selfies and narcissism.

For a new study published in the Open Psychology Journal, researchers worked with 74 individuals from the ages of 18 to 34 over a period of four months, as noted by Eurek!Alert. During this period, researchers studied both the participants' personality changes and their social media use.

They found that those who posted visual posts on social media "excessively," demonstrated approximately a 25 percent increase in narcissistic traits over the course of the study. On the flip side, those who mostly used social media for verbal postings didn't show the same effects.

Lead author of the study, Professor Phil Reed, said, according to Eurek!Alert:

"There have been suggestions of links between narcissism and the use of visual postings on social media, such as Facebook, but, until this study, it was not known if narcissists use this form of social media more, or whether using such platforms is associated with the subsequent growth in narcissism. The results of this study suggest that both occur, but show that posting selfies can increase narcissism."

Reed went on to say, as noted by Eurek!Alert:

"Taking our sample as representative of the population, which there is no reason to doubt, this means that about 20 percent of people may be at risk of developing such narcissistic traits associated with their excessive visual social media use.

This doesn't mean that everyone needs to immediately stop taking selfies. But, it does highlight that people should pay attention to how they're engaging with social media.

Participants in the study averaged about three hours of non-work-related social media use per day, according to Eureka!Alert.

Social media is still relatively new and its full impacts aren't known. Selfies may be good in moderation but, as this study suggests, a reliance on them may lead to more narcissistic traits, as well.