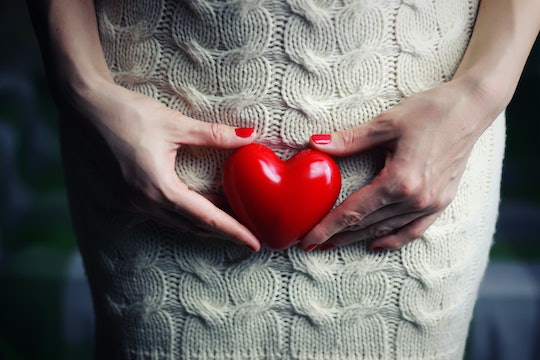 Raise your hand if you're a woman in your 30s who crosses her legs before she sneezes. If you have your hand down, congrats. But if you have a hand proudly in the air, well, know that you're among the close to 50 percent of women who experience postpartum bladder leakage after giving birth.

Problems controlling your bladder are incredibly common post-birth. You wouldn't know it, though, thanks to shame, stigma, and the majority of less-than-willing moms who rarely, if ever, talk about this typical postpartum issue. According to a survey of 1,000 women for women's wellness brand Cora, 89 percent of women are more likely to talk about relationship issues, body image fears, and drinking or drug use than talk about bladder leakage.

Doula Lindsey Bliss wants to change the narrative, though, and she spoke with Romper by phone to discuss how.

Based in New York City, Bliss has been a doula for 10 years. ("Nobody knew what a doula was when I became a doula," she says.) As you can imagine, Bliss has heard a plethora of stories in the span of a decade, especially since she works with people who go through tremendous physical and mental change. When her clients face those challenges they rely on her for support, and bladder leakage is an all too common concern for Bliss' clients.

"It's not something they feel they can reach out to their doctor about, due to maybe stigma," Bliss tells Romper. "I'm not really sure why people don't reach out as much, I just know I get confided in a lot and people are usually saying it with an embarrassed, hushed tone."

Bliss, who says she tries to meet her patients' anxieties with humor and reassurance, wants people to know that postpartum bladder issues are common. Increased pressure on the pelvic floor during pregnancy and weakened core and pelvic muscles after delivery are often directly related to maternity-related incontinence. But just because they're common, she says, doesn't mean postpartum women just have to grin and bare it.

Why is it OK for us to ignore these things because they're not 'bad enough'? We should be addressing them right away.

Forty-five percent of mothers from the Cora survey consider dealing with their bladder leakage after having a baby worse than dealing with their labor and delivery healing process. Unfortunately, the issue is going largely unaddressed, not only between postpartum women and their care providers, but also with their friends. According to the same survey, nearly 58 percent of women who have experienced light bladder leakage would like to talk to their friends more about it, but they’re afraid of being judged.

Of the 1,000 women surveyed, more than half (52 percent) think incontinence only affects roughly 10 percent of women, when it actually affects 25-45 percent. In other words, people think they're the only one dealing with this issue. And since, in our culture, bodies are very often perceived as embarrassing or shameful, bodily fluids are especially embarrassing. When you compound the cultural stigma with the very complicated matter of having a female body, sadly, postpartum continence issues have a tendency to be pushed out of sight and those dealing with it are left to suffer in silence.

But the issue is not hopeless, though. Bliss tells Romper that there is recourse for bladder leakage. Letting your care provider in on the problem — and if it bothers you it is a problem — can let you know about avenues you can try to help you improve, such as pelvic floor physical therapy. Unfortunately, many new moms she sees don't seek help until the problem has either become unbearable, or has continued unabated for far too long.

"We just let it go," Bliss says. "We don't address it, but why? Why is it OK for us to ignore these things because they're not 'bad enough'? We should be addressing them right away." She also points out that postpartum moms are not given appropriate information on how to heal after childbirth. "They're told, 'See you in six weeks' [at your first postpartum appointment], but what about the time in-between birth an six weeks?"

Now people can talk about menstruation. Now bladder leakage is the next thing that needs a little work.

But even if you don't or haven't mustered the courage to discuss this issue with your doctor, Bliss wants you to know it's never too late to make self-care a priority. "They can talk about what's happening with their body and that they're worth it and important enough to address the things that are going on," she says.

The moral of the story: postpartum bladder leakage happens, it is common, but it doesn't necessarily have to be your new normal. Encouragingly, Bliss says she's seen some improvement on reducing the stigma, but that we have a ways to go.

"It's tricky being the keeper of secrets and then wanting people to know that they shouldn't keep secrets," Bliss continues. "[I want people to know] they can talk about what's happening with their body and that they're worth it and important enough to address the things that are going on."