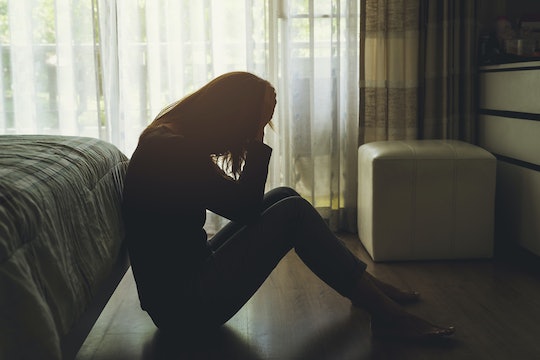 After Losing Her To Postpartum Depression, This Mom's Family Is Speaking Out

There's never an easy time to struggle with mental illness, but for women who battle postpartum depression (PPD), the stigma can be particularly crippling. After all, reaching out for help when you're experiencing symptoms of depression or anxiety, or suicidal thoughts, can be challenging to begin with. But when you're also a mother? Well, the weight of the expectations placed on moms to be perfectly happy and fulfilled by their children can make it so much worse. After giving birth to her second child in 2016, 32-year-old Kara Kovlakas found herself struggling, and postpartum depression led her to end her life a few months later. But her death came as a huge shock to her family and friends, according to Babble, who had no idea the extent of what she was going through.

Kovlakas' five sisters were among the many people left reeling by the loss, and in an effort to raise awareness about the reality of postpartum depression — and the pressing need to help fight the stigma that keeps people like Kovlakas suffering in silence — they've since come together to form Light For Kara, a website advocating for improved maternity mental health, and to spread awareness of PPD. And while it may be too late to help their sister, their mission is so necessary: postpartum depression affects an estimated 1 in 7 women in the United States, according to the American Psychological Association, and in about 50 percent of cases, it's the first episode of depression they've ever had. But according to Postpartum Progress, only about 15 percent of women actually receive professional treatment for their illness, meaning that many women are left feeling like they need to manage their illnesses by themselves.

By all accounts, Kovlakas' death — which occurred only a day before her 33rd birthday — wasn't something anyone saw coming. On the surface, her life seemed pretty great: she was a married mom of two young children, and had spent more than a decade working as a third grade teacher at Marvin Elementary School in her hometown of Norwalk, CT. Her obituary described her death as "unexpected," according to The Norwalk Daily Voice, and spoke of her love for teaching, and for her children and family. And she definitely seemed well-loved in her community: in only four days following her death, a GoFundMe campaign set up to help her husband and children raised more than $98,000.

But as is so often the case with PPD (and with mental illness in general), the reality was much more complicated. According to Babble, Kovlakas' sister, Lauren Shrage, said that she'd suffered for years from anxiety, and that giving birth had only amplified that struggle. Kovlakas had been seeing her doctor about her anxiety, and Shrage said that she was taking medication, but that she was also skilled at pushing through, and didn't necessarily look like someone who was struggling as much as she really was. Shrage told Babble that Kovlakas was "up and active, doing fun things with her kids" — one reason why it came as such a shock when her family learned she had planned her suicide in advance.

As tragic and heartbreaking as Kovlakas' story is though, it's even more heartbreaking to consider that it's not particularly uncommon. According to a 2013 study by Northwestern Medicine, suicide is behind an estimated 20 percent of postpartum deaths, making it the second most common cause of mortality in postpartum women. And while that's a horrifying statistic, the reality is that there is still so much that can be done to help prevent these deaths — a major reason why Kovlakas' sisters decided to speak out about her suicide instead of keeping the details private. By sharing her story, Shrage said they hoped it could let other women struggling know that they don't have to feel ashamed to get help, and that it could also serve as a wake-up call to everyone else when it comes to recognizing the warning signs.

According to the Mayo Clinic, symptoms of postpartum depression include mood swings and excessive crying, difficulty bonding with your baby, changes in appetite (feeling like you don't want to eat, or eating much more than usual), changes in sleep (struggling to fall or stay asleep, or oversleeping), overwhelming fatigue, and withdrawing from family and friends. To be clear, experiencing some of these symptoms doesn't automatically mean you have PPD — the "baby blues" are common after giving birth, and aren't usually cause for concern, and let's be honest, parenting a newborn is always exhausting and kind of overwhelming. The difference though, is that PPD symptoms don't go away after a week or two, and they can become so intense that they can interfere with a woman's ability to care for her baby, or to handle her usual daily tasks. And in rare cases, women can also develop severe symptoms of postpartum psychosis, which may include confusion, disorientation, obsessive thoughts, paranoia, or delusions.

No matter how severe the symptoms are though, it's important that anyone experiencing PPD symptoms speak to their doctor about it as soon as possible. While new motherhood is often portrayed as being a beautiful time of happiness and overwhelming love, it's definitely not uncommon to feel less-than-joyous feelings — and it's definitely not a sign that you've done anything wrong, or that you don't love your baby. According to WebMD, about 90 percent of women with PPD can be treated successful either through medication alone, or a combination of medication and psychotherapy, meaning that no one should have to feel as though their only option is to take their own life. (If at any point you have thoughts of harming yourself or your baby, it's important to call 911 or your local emergency assistance number immediately, or call the National Suicide Prevention Lifeline at 1-800-273-TALK.)

There will likely never be any way for Kovlakas' family to ease the pain that comes from losing her, but by being open about her struggle, they are making a big difference. While the symptoms of PPD are crippling, what's even worse is the fact that the stigma surrounding maternal mental health remains strong — and it's the stigma that often keeps women from accessing the kind of help they need. Fighting back against it is the best way to help all the women who are currently suffering, and who will inevitably suffer in the future. And not only will it help to keep them alive, it'll help to give them back the happiness and well-being they deserve.